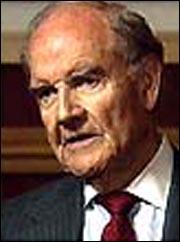 George McGovernment,* speaking from somewhere in space, has transmitted these thoughts to breathlessly waiting Earthlings:

"Liberals are lambasted," he said. "Some people don't even want to say the word."

He said conservatism and liberalism have always had their place in U.S. history and both should continue to be at the cornerstone of American politics.

It's true that "liberals" don't even want to say the word; they've switched to "progressives", for all the good it will do them.

So conservatism is okay? What kind of "progressive" are you, McGovernment? But what about libertarianism? Probably never heard of it.
__________
* One of my children -- who have always been wise beyond their years -- gave McGovern this more appropriate surname sometime in the 1970s.
Posted by Loquitur Veritatem at 2:59 PM