Whither the Stock Market?

I have, for several years, been tracking what is now called the Dow Jones Wilshire 5000 Total Market Index, in particular, the D-J Wilshire 5000 Full Cap, a capitalization-weighted index of U.S. stocks. The index now, and since its inception, has included more than 5,000 stocks, and is reputed to offer the best measure of the overall performance of U.S. stocks, in terms of price. (See this paper about the origin and calculation of the index, and this chart for a broad comparison of the Wilshire 5000 some other U.S. stock indices.)

My spreadsheet on the D-J Wilshire 5000 Full Cap goes back to December 1970, the first month for which the index was calculated. (The official site no longer provides data for the period December 1970 through December 1987.) In addition to tracking the current-dollar value of the index, I have converted it to an inflation-adjusted index by applying the CPI-U (available here, among other places). Here is a picture of the inflation-adjusted index from December 1970 through September 2007 (to enlarge, right-click and select "open in new tab"): 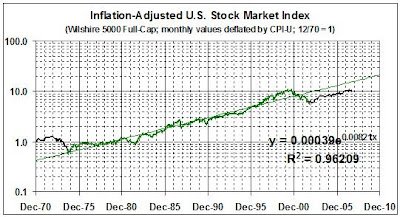 The regression line fits the entire period, December 1970-September 2007, and indicates real growth in stock prices of 10.4 percent annually. The real rate of price growth from the bottom in September 1974 to the peak in March 2000 was 12.1 percent. But how many investors get in at the bottom and out at the top? A more realistic measure of long-run returns to stock investors during the past 30-odd years is the real rate of price appreciation from the bottom in September 1974 to the bottom in September 2002: 8.5 percent annually. That's nothing to sneeze at, mind you; patience pays off when it comes to the stock market. (UPDATE: The real rate of return on the index from September 1974 through November 2007 was 9.0 percent, which is almost identical to the exponential trend for the period after removing the "bubble" that began late in 1996 and ended early in 2001. This underscores the idea that it is reasonable to expect something like an 8.5 real rate of return, in the long run.)

In light of the stock market's recent volatility, which reminds me of the volatility that preceded the crash of 2000-2002, I have had second thoughts about the sustainability of the current bull market. (My first thoughts are here.) The market's recovery since the bottom in September 2002 has brought it back to the inflation-adjusted peak reached in March 2000. As a result, the market may now be meeting some "resistance" (in addition to other factors that may be roiling it, such as the price of oil, uncertainty about the economy, and uncertainty about interest rates). The resistance, if it is that, would be led by those investors who were in the market at its peak in 2000, and held on through the bottom in 2002. Many of them may now be trying to cash out as they break even (in real terms), especially after having reaped (on average) a real, annual gain of more than 13 percent since the market bottomed five years ago.

If I am right about the import of volatility and the possibility of resistance , the broad market may be headed toward a secondary bottom, one not as deep as the bottom reached in September 2002. Long bull markets often are interrupted by dips (see graph above). (In fact, in the long view, the U.S. stock market has been a bull market since its inception -- a bull market punctuated by dips known as crashes. See this table and this graph, for example.) The first dip in the bull market of 1974-2000 began in earnest around November 1980. That dip did not end until 20 months later, when the market reached a secondary bottom in July 1982.

Is it possible that the current bull market reached a temporary peak in May of this year, and is now descending toward a secondary bottom that it will not reach for a few years? Consider the parallels between the market of 1970-1982 and the market of the past nine years: 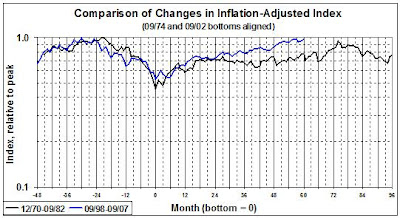 A reversal that lasts a year or two seems entirely possible to me.

I have only one thing to add: Don't bail out now, unless you absolutely, positively need the money. I could be wrong about the reversal. In any event, stocks are for the long run.