the political successes of the G.O.P. since it was taken over by movement conservatives, ...had very little to do with public opposition to taxes, moral values, perceived strength on national security, or any of the other explanations usually offered. To an almost embarrassing extent, they all come down to just five words: southern whites starting voting Republican.

Barry Goldwater, the Republican Party's "loss leader" in 1964 wasn't a "movement conservative"? Anyway, Krugman's charge is answered here (by Matt Yglesias), here (by Edward Glaeser), and here and here (by Ross Douthat). Among many telling points Douthat makes in the last-linked item is this one:

Southern whites were, and are, natural conservatives who happened to find themselves in the more liberal of the two parties; once Democrats associated themselves with the civil-rights movement, there wasn't anywhere else for white Mississippians and Alabamans to go except the GOP.

There's much more -- in all of the linked items -- and all of it is compelling (and not forgiving of GOP race-baiting, to the extent that it occurred).

My purpose here isn't to rehash Yglesias, Glaeser, and Douthat, but to tell the tale of the numbers. Specifically, I look at the share of popular votes garnered by GOP presidential candidates in the 11 States of the former Confederacy, in relation to the GOP candidates' shares of the national popular vote. For example, the GOP candidate in 1944 (Thomas E. Dewey) garnered 17 percent of the popular vote in Texas; Dewey's nationwide popular-vote share in that election was 46 percent. The index for the Texas vote for 1944 is therefore 0.37 (17 percent divided by 46 percent). 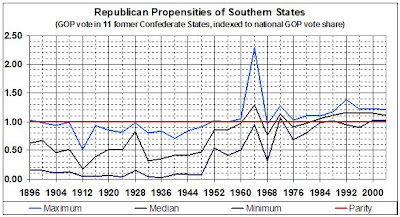 As Reconstruction ended in the South, Democrats gradually reasserted political control and began to suppress the black vote, which had been heavily Republican. The suppression of the black vote was, by 1904, as complete as it would be, and the median value of 0.46 reflects that. (The dip in 1912 reflects the siphoning of GOP votes by Teddy Roosevelt's potent third-party candidacy, which relegated the GOP to an ignominious third place in the popular and electoral vote counts.)

The median value remained at or below 50 percent through 1948, with the exception of 1928, when the Democrat candidate was Al Smith, a Roman Catholic. (The pro-GOP spike in 1928 suggests that about half of the South's Democrats defected because of Smith's Catholicism.) The noticeable dip from 1932 through 1944 points to the vein of Southern populism that was exploited by Democrats' anti-capitalist rhetoric. (See, for example, this post about FDR and this Wikipedia entry about Louisiana's Huey Long.)

Southern voters began to abandon the Democrat Party in 1948, when Strom Thurmond ran under the banner of the "Dixiecrat" Party. That party (formally, the States' Rights Democratic Party) arose in response to the national party's adoption of an anti-segregation plank at its convention. Thurmond was on the ballot in 17 States, but most of his support came from the 11 former Confederate States. He garnered only 2.4 percent of the popular vote, nationwide, but carried four Southern States -- Louisiana, Mississippi, Alabama, and South Carolina. Thurmond's victories there, and his good showing in several other Southern States, came at the expense of the Democrat Party's nominee, Harry Truman, and do not show up as a gain for the GOP in 1948.

Having nowhere else to turn in 1952, many Southern Democrats defected to the GOP, and continued to do so in 1960, when the Democrat Party chose John F. Kennedy (a Catholic in name) as its presidential candidate.

Before you conclude that the GOP is strong in today's South because of the events of 1948 and 1960, consider these points:

1.What Krugman conveniently ignores in his anti-Republican screed is the South's long embrace of the Democrat Party, for blatantly racial reasons. Democrats Woodrow Wilson and FDR -- who held the presidency for 20 of the first 45 years of the twentieth century -- enjoyed strong support in the South and were, therefore, segregationist in their policies. Southern Democrats disproportionately voted for FDR and his New Deal, about which Krugman's only complaint could be that it wasn't socialistic (or fascistic) enough.

2. The South's defection to the GOP peaked in 1964, the year of Barry Goldwater's inglorious defeat -- another "lost cause" for the South. Goldwater, who was anything but a segregationist, simply had strong views about the proper role of the federal government in relation to the States, namely, that it should butt out of the affairs of individuals and businesses. Such views were then more widely embraced in the South than in the North, and had as much to do with the South's Jeffersonian tradition as with racial segregation.

3. The GOP's grip on the South has, if anything, weakened since 1964. Whatever Richard Nixon and Ronald Reagan might have done to woo Southern voters did not cause those voters to flock to the Republican Party. Barry Goldwater's conservatism caused that.

4. What about the sharp drop in Southern support for the GOP in 1968? That drop coincides with George Wallace's segregationist, third-party candidacy in 1968. Krugman would say: "Aha! That defection, and the GOP's recovery from it in 1972 (when Wallace was out of the picture), demonstrates that the GOP depends (or depended) heavily on the Southern racist vote." Not so fast, Paul: Southern Democrats defected to George Wallace in 1968 at the same rate as Southern Republicans.

5. Why was it legitimate for a super-majority of white Southerners to support the New Deal out of desperation, but illegitimate for many of them (and their children) to turn, years later, to a party more in tune with their conservative inclinations? The South merely has become the North in reverse: strongly Republican (as the North is strongly Democrat) for reasons of ideology, not of race. On that point, here is a harder-to-read but more accurate depiction of the South's attachment (or lack thereof) to the Republican Party: 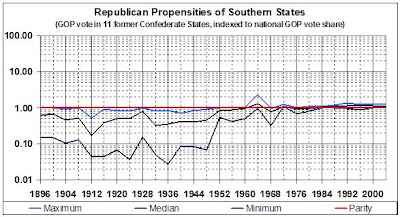 Krugman's condemnation of racial politics in a major political party comes 60 years too late, and it's aimed at the wrong party.

* * *
Krugman's real complaint, of course, is that Republicans have been winning elections far too often to suit him. His case of Republican Derangement Syndrome is so severe that he can only pin the GOP's success on racism. I will refrain from references to Freud and Pinocchio and note only that Krugman's anti-GOP bias seems to have grown as his grasp of economics has shrunk:

Krugman and DeLong: A Prevaricating Pair
Professor Krugman Flunks Economics
Paul Krugman, an Inspiration to Us All
Social Security: Myth and Reality
The Last(?) Word about Income Inequality
Krugman and Monopoly
Rich Voter, Poor Voter: Revisited
Setting the Record Straight about Paul Krugman's "Who Was Milton Friedman?"
Krugman vs. Krugman

Posted by Loquitur Veritatem at 2:40 PM