My eighth forecast is here.

As of today, the odds point to this result:

I have devised a "secret formula" for estimating the share of electoral votes cast for the winner of the presidential election. (No, it's not "method 3," described here.) The formula is based on the 35 presidential elections from 1868 through 2004. The standard error of the estimate is 3.6 percentage points, as against the winner's average share for the 35 elections, which is 71.7 percent. Here's how formula-based estimates for the 35 elections compare with the actual results of those elections: 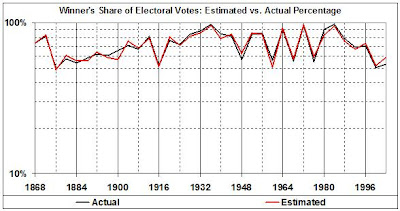 The only "wrong" pick is the one for the election of 1876, which was decided even more crookedly than the 1960 election (see below).

The largest errors (greater than 5 percentage points) occur in these seven instances:
My formula currently yields these estimates of the outcome of next year's presidential election (CORRECTED, 12/13/07):

In sum, the prospect of a Democrat victory isn't as clearcut as method 1 suggests.

Will method 1 or method 2 prove to be the more accurate one? The answer is less than a year away. Stay tuned.