All manner of good (and bad) stuff has popped up about the relationship between income and political preferences. Tyler Cowen of Marginal Revolution points to this post at Free exchange, which I shamelessly repeat in its entirety (with the addition of some comments and additional links) and then expand upon:

PAUL KRUGMAN, brimming with conscience [a reference to Krugman's recently published The Conscience of a Liberal: LC], continues to scrounge for evidence [here also: LC] that the monied prefer the Grand Old Party. "There’s a weird myth among the commentariat that rich people vote Democratic," Mr Krugman sighs.

Well, I suppose it's weird for the commentariat to believe Pew Research Center reports that find "Democrats pulling even with Republicans among registered voters with annual family incomes in excess of roughly $135,000 per annum." $135,000 may not sound exactly "rich" to some of us, but it is well into the top decile of the income distribution, which counts as the "upper class" if we're doing decile-based class analysis. As part of his myth-slaying efforts, Mr Krugman offers a chart from Columbia's Andrew Gelman from whom we have also learned that the wealthiest American states now lean Democratic (as was noted in this August post on precisely this issue). [I wrote here about an earlier version of the Gelman paper that is linked in the preceding sentence. Krugman links to a recently updated version, which is here: LC] Wealthy localities remains likely to tilt Republican in the South, Gelman finds. But in "media center" states such as New York, California, and the states contiguous to the Imperial Capital, Democrats dominate the country clubs. [See this post by Gelman, especially the x-y plots and the final sentence. See also this list of the 100 Zip Codes with the highest incomes: LC]

Furthermore, the writer and bon vivant Julian Sanchez points us to this Daniel Gross column in Slate wherein we are informed of a poll showing that:

The petit bourgeoisie millionaires were passionately for Bush: Those worth between $1 million and $10 million favored Bush by a 63-37 margin. But the haute millionaires, those worth more than $10 million, favored Kerry 59-41.

You hit a point at which you don't just have a lot of money; you've got "f[---] you" money. ... At which point "voting your economic self-interest" ceases to mean much, since your economic interests are covered [by] whoever's in power. You can afford to stop voting your pocketbook and start voting whatever makes you feel like a mensch. [You can vote your inner adolescent or your irrespsonsible "take that" attitude: LC]...

Ironically, this may be a point in favor of those who appeal to the declining marginal utility of money as an argument for economic redistribution. If this is right, then the efficient place to start imposing really crushing marginal taxes is at the income or wealth level where people start voting heavily Democratic.

Ha! But seriously, the real issue here is whether economic interests are a major determinant of voting patterns at all. If wealthy voters in certain culturally similar states prefer Democrats and those in other culturally similar states prefer Republicans, we might plausibly infer that something other than their wealth is determining wealthy votes. And since individual votes are drops in an ocean, with barely a whisper of causal power, those of us who take economic logic seriously might expect citizens, wealthy or not, to forget about voting their interests and instead cast ballots that will reliably supply utility by, say, expressing their moral values, political identity, or sense of solidarity with an imagined community. As Loren Lomasky and Geoffrey Brennan write in their classic work "Democracy and Decision":

It would be an error of method to assume whenever electoral behavior is consistent with the self-interest hypothesis that citizens vote in order to further self-interest. And it is an error of logic to assume that rational agents will, purely as a matter of course, vote in a self-interested manner.

I fear that Mr Krugman's book may turn on at least one of these.

I have no doubt that Krugman's book is both erroneous of method and logic.

I entirely agree with Julian Sanchez's point that very rich voters vote mainly to make a statement. As I wrote here,

[t]he "rich" in the rich States -- as is obvious from casual reading about limousine liberals and wannabe limousine liberals in New York and California -- have by and large bought into the regulatory-welfare state, which is mainly a creation of the Democrat Party. So, the rich-State rich vote their "consciences" or, rather, they tend to vote Democrat because the think they can

The same principle applies to academia [e.g., see this]. Conservative and libertarian intellectuals tend to avoid academic careers (call it pre-emptive migration) because they don't want to adapt their thinking to fit in with the liberal supermajority on most campuses.

Joining Andrew Gelman and the Pew Research Center, I offer this evidence of Krugman's displacement from reality: 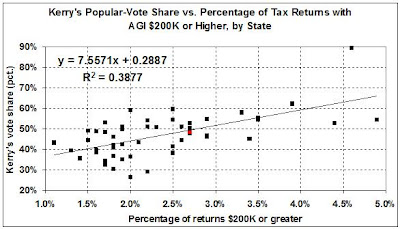 Sources: Kerry's vote, as a percentage of the total number of popular votes cast in each State, is from RealClearPolitics (here). I derived the percentage of tax returns with an adjusted gross income of $200,000 or more from "Table 2.--Individual Income and Tax Data, by State and Size of Adjusted Gross Income, Tax Year 2005," which is available through this page at the IRS website.

What could be clearer than that? The more you make, once you have crossed a threshold, the more likely you are to vote Democrat. That threshold, according to the Pew Research Center, is a household income in 2007 of $135,000 -- the point at which one joins the top 10 percent.

A geographical breakdown confirms the generalization that the more you make (above the threshold), the more likely you are to vote Blue: 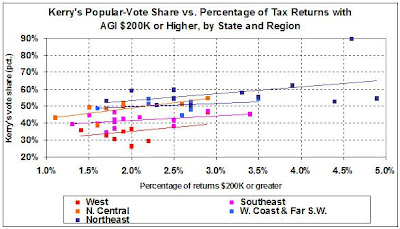 A few observations and explanations: The Southeast isn't as Red as it was a few elections ago -- owing to the rapid urbanization of such States as Georgia, Florida, and Virginia -- but most Southeastern States remain on the Red side of the ledger, most of the time. Maryland and D.C., as long-standing denizens of the super-urban Bos-Wash corridor, belong in the Northeast region, just as West Virginia -- a unionized, industrial State -- belongs in the North Central region with its neighbor, Ohio.

In any event, the positive relationship between income and Blueness holds for each region, even though there are also inter-regional differences. ("Birds of a feather...," as suggested above.) If Blueness were simply a regional trait, each of the trendlines would be flat -- but, in fact, each one slopes upward to the right. Thus (to say it again):

The more you make (above a threshold which is now $135,000), the more likely you are to vote Democrat.

Paul Krugman (no prole he) is living evidence of that statement.
Posted by Loquitur Veritatem at 11:50 PM