I begin to answer the question by presenting the following graphs. They show the nine-year, centered won-lost (W-L) record (a.k.a. winning percentage) of each of the franchises that has had teams in the American League. (To enlarge an image, right-click on it and select "open in a new tab.") 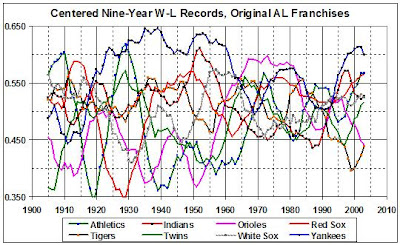 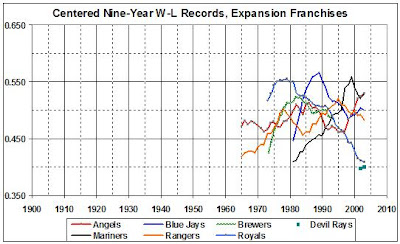 Each franchise is identified by the nickname of its current team. Some franchises have changed cities, of course, and some teams' nicknames have changed, even when the teams have stayed put.

I chose to plot nine-year, centered W-L records for three reasons. First, a team's record over nine years should obliterate aberrations: unusually bad or good years. Second, the selection of nine years (rather than ten, for instance) allows for the computation of a centered average. Third, a centered average gives a better indication of a team's success (or failure) in the year for which the average is plotted.

I plotted the original eight franchises separately from the seven expansion franchises for two reasons. First, a graph that plots the records of all the franchises would be too cluttered to read easily. Second, I wanted to highlight the effects of expansion (if any) on the success (or failure) of the original franchises. (Note that the records of the seven expansion teams include those of the Milwaukee Brewers, now a National League team. The Brewers entered the AL in 1969 as the Seattle Pilots, moved to Milwaukee in 1970, and moved to the National League after the 1997 season. Accordingly, I computed and plotted nine-year, centered averages only for the years that the Pilots/Brewers were an AL team.)

Now, for some relevant history:
Given that, what can one glean from the two charts above? One obvious fact (obvious to me, anyway) is that the AL has become more competitive since the onset of expansion and free agency. (By "competitive" I mean that the teams' W-L records have become more tightly bunched around .500.) The following graph confirms that observation. (To enlarge the image, right-click on it and select "open in a new tab.") 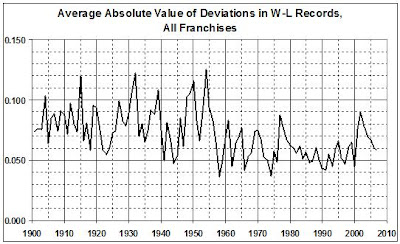 It seems indisputable that baseball, represented here by the AL, has become more competitive since the advent of expansion and the establishment of free agency. (The "blip" around 2002 seems to be an anomaly caused by the confluence of several unusually abysmal and outstanding seasons.)

Why? I suggest the following:
In a future post I will discuss the records of certain teams -- the Athletics and their wild swings between excellence and dysfunction, for example.
Posted by Loquitur Veritatem at 5:45 PM