The answer to the title question might seem obvious. But it is not.

For reasons I discuss here, here, and here, post-season play is of no account when it comes to assessing a baseball team's quality. The acid test of quality is the ability to finish first at the end of a regular season's play. The acid test of quality over the long haul is the ability to amass first-place finishes, measured in terms of first-place finishes per season.

But what about quality as measured by the proportion of games won by a franchise over the long haul? Is there a good correlation between that overall record and the number of first-place finishes garnered per season of play? I will here answer that question -- and question some of the answers -- with a look at the American League.

Drawing on statistics available at Baseball-Reference.com, I derived for each AL franchise its overall record and number of weighted first-place finishes per season:


I then regressed first-place finishes per season against overall record, including only those teams with any first-place finishes. (In other words, I omitted the hapless and perhaps hopeless Devil Rays; the Brewers, late of the AL, escaped oblivion only by dint of their 1982 division title.) The result: 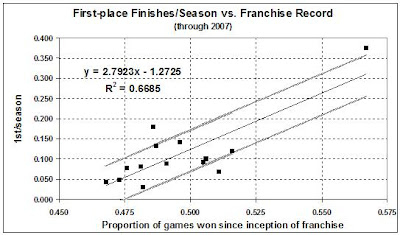 The gray lines bound the standard error of the regression and highlight the outliers: the Athletics and Yankees on the high side, the Indians on the low side. (The plot points, going from left to right, correspond with the franchises listed in the table above, reading downward from Rangers through Yankees.)

Inspection of the graph suggests at least three questions:
A 1. The expansion teams -- on the whole and even including the Devil Rays -- have slightly outperformed the original teams. 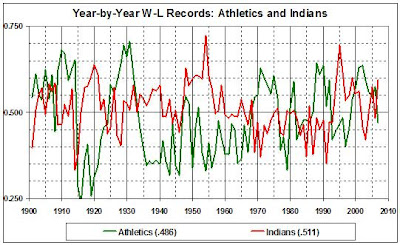 A 3. By taking the Yankees out of the picture, I get this: 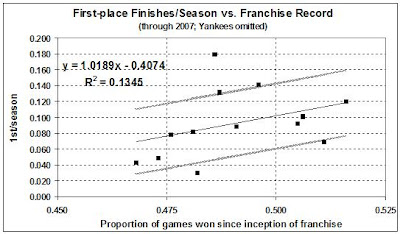 There's still a positive relationship between overall record and first-place finishes, albeit a weaker one. However, if the Yankees did not exist, it would be necessary to invent them. Oops, I mean that if there had been no Yankees franchise, the White Sox, Tigers, and Red Sox (especially the Red Sox) would have had more first-place finishes. (The Indians might have had more, as well.) That is to say, there would be a stronger positive relationship than the one depicted immediately above.

A4. Frequency of first place finishes is more important than overall record. A winning record -- as in the case of the Indians, with the third-best overall record in the AL -- means only that a franchise has had more good years than bad ones. Look at the Red Sox, with their second-best overall record and their general frustration at the hands of the Yankees over the years: 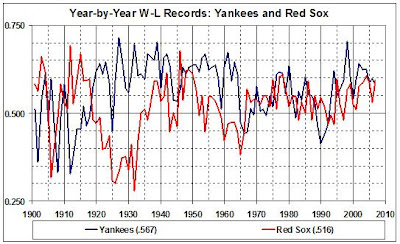 Finishing first is the measure of a team's quality, regardless of the team's fate in post-season play.