Why So Few Free-Market Economists?

In "Is There a Free Market Economist in the House? The Policy Views of American Economic Association Members," Daniel B. Klein and Charlotta Stern report:

People often suppose or imply that free-market economists constitute a significant portion of all economists. We surveyed American Economic Association members and asked their views on 18 specific forms of government activism. We find that about 8 percent of AEA members can be considered supporters of free-market principles, and that less than 3 percent may be called strong supporters. [Abstract of the paper]

Klein and Stern, in the text of their paper, say that

My score, which will come as no surprise to readers of this blog, was 4.67. Where did I go "wrong" -- why not a perfect score of 5.0? With regard to question 16, which asks about "tighter rather than looser controls on immigration," I strongly oppose unselective immigration on economic and social grounds, for reasons detailed here. Also, the answer to question 17, which asks about "military aid or presence abroad to promote democracy and the rule of law," must take into account whether (in particular cases) such actions serve Americans' long-run interets.

Klein and Stern offer an alternative analysis, in which they drop two questions that seem unrelated to free-market principles: the one about military aid or presence abroad that I discuss above, and one about monetary policy. Dropping those two questions has little effect on the results of the analysis; the average score barely rises, from 2.64 to 2.66. (My score drops from 4.67 to 4.44.) For the 16 issues, the mean score for self-identified Democrats was 2.34, as against 3.30 for self-identified Republicans. Although Republicans are, on average, "middle of the road" (according to Klein and Stern), the distribution of scores highlights the marked difference between Democrat and Republican economists: 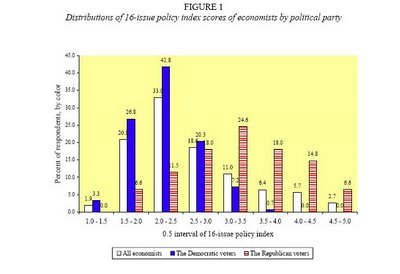 Klein and Stern propose several answers to my question -- "Why so few free-market economists?" -- none of which I find compelling. I offer two answers. First, relatively few academic economists self-indentify as libertarians; the average score of those who did was 4.30. Second, libertarians aside, most persons who garner a Ph.D. in economics (i.e., most members of the AEA) go through a "hazing ritual," which Arnold Kling describes:

One of the best incumbent-protection rackets going today is for mathematical theorists in economics departments. The top departments will not certify someone as being qualified to have an advanced degree without first subjecting the student to the most rigorous mathematical economic theory. The rationale for this is reminiscent of fraternity hazing. "We went through it, so should they."

Mathematical hazing persists even though there are signs that the prestige of math is on the decline within the profession. The important Clark Medal, awarded to the most accomplished American economist under the age of 40, has not gone to a mathematical theorist since 1989.

One of the consequences of indoctrination in mathematical economics is that its practitioners come to believe, wrongly, in their understanding of and ability to predict economic phenomona. That leads them to the consequent belief that -- if only they or like-minded persons were "in charge" -- the economy could be fine-tuned, in the large and in the small. Fine-tuning in the small means, among other things, preventing or correcting so-called market failures, which are those market outcomes of which self-deludely "omniscient" economists disapprove.

Posted by Loquitur Veritatem at 12:47 PM