Can Money Buy Excellence in Baseball?

My measure of excellence is the fraction of games won during a regular season.

It is true that every owner, manager, coach, and player would like to win the World Series -- and that some owners (especially George Steinbrenner) spend a lot of money toward that end. But the short series at season's end -- League Division Series, League Championship Series, and World Series -- prove nothing about which team is better or best. It takes a lot of games to determine a team's quality, which is why the regular season consists of 162 games.

The significance of post-season play has changed since the first World Series was played in 1903. The main impetus for starting the World Series was a desire to determine which of two league champions -- who had not faced each other during the regular season -- was the better team, insofar as "better" could be determined by a best-of-nine or best-of-seven series. With the advent of divisions within the two major leagues, and interleague play during the regular season, postseason play has evolved to a series of contests between teams that have faced each other during the regular season. The main impetus for the present playoff format is a desire to fill seats and to sell food, drink, memorabilia, and television rights.

Divisional play and wild-card slots make it possible for less-than-excellent teams to participate in post-season play. Short series make it possible for such teams to garner championships in post-season play. Who believes that Oakland A's really are better than the Minnesota Twins -- even though the A's swept the Twins in their recent series -- when the Twins (with a regular-season winning average of .593) beat the A's (.574) in six of their ten regular-season games? Who believes that the Detroit Tigers really are a better team than the New York Yankees -- even though the Tigers have eliminated the Yankees from postseason play -- when the Yankees (.599 in the regular season) beat the Tigers (.586) in five of their seven regular-season games? I dismiss post-season play as an indicator of excellence.

With that out of the way, let's look at fraction of games won as a function of payroll for the 1998, 2000, 2002, 2004, and 2006 seasons. Fraction of games won is available at Baseball-Reference.com; click on "Leagues" and then, for a particular year, click on the adjacent link ("NL" or "AL") to get that league's final, regular-season standings for that year. I obtained team payrolls for 1998, 2000, 2002, and 2004 from this spreadsheet. (Specifically, I used the totals for early April, given in the right-most column.) I used these early April payrolls for 2006. The use of payrolls for the same point in each season imparts some consistency to the analysis, even though payrolls change throughout a season because of trades, waiver claims, callups, and releases.

The following six graphs depict my statistical analysis of the data. The first five graphs treat each of the seasons individually. In the sixth graph I combine all five seasons by constructing, for each season, a payroll index for each team, setting the lowest payroll for that season equal to 1. The red plot points in all six graphs are for the Yankees; the black plot points and the least-squares fits through them are for the other 29 teams. 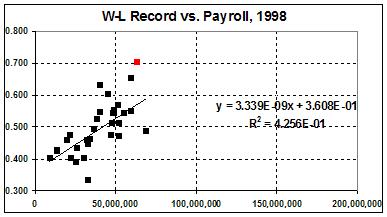 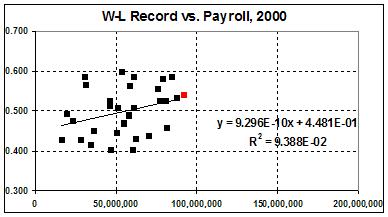 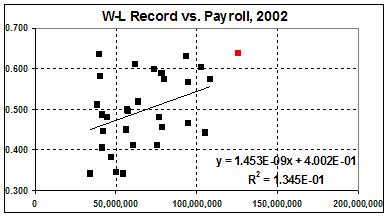 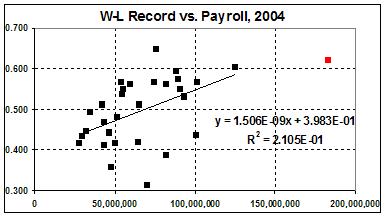 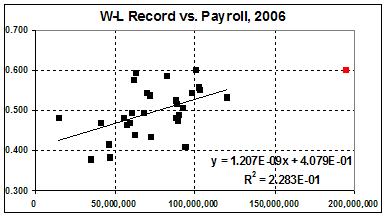 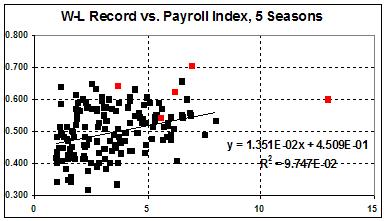 Several things jump out from these graphs and the underlying data:

Money can -- and often does -- buy excellence, but the correlation between payroll and excellence declined after 1998. This suggests that bidders for free agents have, in general, become less discriminating about the quality of those players and how much their particular skills will add to the overall performance of the acquiring teams.

The wide dispersion of points around the regression lines indicates the uncertainty involved in selecting players. There are a few teams that have been, for a time, consistently good at it (e.g., the A's, Braves, Cards, Giants, Mets, Twins, and Yankees) and a few that have been, for a time, consistently bad at it (e.g., Cubs, Devil Rays, Marlins, and Phillies). The Yankees have gone from very good to mediocre, in terms of getting value for their payroll dollars.

The Yankees of 1998 were a "steal," even though the team had the second-highest payroll for that season. The Yankees have since regressed to the mean, as George Steinbrenner has paid dearly to keep certain of his stars (e.g., Derek Jeter and Jorge Posada) and to acquire big-name players (e.g., Roger Clemens and Alex Rodriguez), not all of whom have delivered their money's worth. (Yes, A-Rod, that means you.)

Nevertheless, Steinbrenner has been getting his money's worth -- in that his teams have done very well during the regular season. That's not enough for Steinbrenner, of course, because he spends a lot of money on player salaries in order to win World Series. Six straight years of postseason futility should by now have told Steinbrenner that his main problem isn't with the talent that he puts on the field but with Joe Torre's inability to manage that talent effectively in postseason play.

How so? A short series involving teams with good pitchers generally is won by the team that is adept at putting a few runs on the board early by playing "small ball." That puts the opposing team off stride and forces it to make high-risk moves in an effort to play catch-up ball. Torre's prevalent management style -- which works well over the long haul of a seaon -- is not to play "small ball" but to lay back and wait for his big bats to produce runs in bunches. That strategy doesn't work well in the postseason, when you're up against baseball's better teams, because those teams usually have strong pitching staffs.

And so, given another postseason disappointment for the Yankees, I fully expect Mr. Steinbrenner to replace Joe Torre -- in addition to doing something about A-Rod, the Yankee bullpen, and half the starting rotation. Torre's successor should be adept at "small ball," and should make the Yankees practice it throughout the regular season so that they have mastered it by the time postseason play rolls around in 2007.
Posted by Loquitur Veritatem at 11:48 PM