The population of the United States has passed the 300,000,000 mark. (See here.) John Tierney and Austin Bay (channeling Mark Steyn) explain why population growth is a good thing. I agree that it is.

Among the seven main causes of economic growth that I discuss here is population growth, which

means more people to work "hard" and "smart"; more output that can be saved and invested; more inventors, innovators, and entrepreneurs whose activities can be leveraged into greater per-capita output; and a multiplication of opportunities for beneficial voluntary exchange.

As I observe here, population growth is a testament to the ability of the human race to provide for itself. What is relevant is not that some people today live in wealth while many more live in poverty, but that human beings -- on the whole -- are far better off than they were 100, 1,000, and 10,000 years ago. Thus: 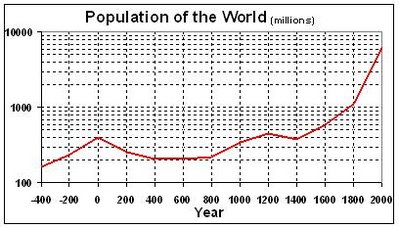 Posted by Loquitur Veritatem at 10:25 AM