Welcome to the Land of Oz

And I don't mean Australia. I've been living in the Land of Oz, and I didn't know it. But I do now, thanks to outfits like WING TV. For example, here's the way the world works, according to Victor Thorn's "The Real Dark Overlords":

George Bush is an empty suit Manchurian creation of nepotistic fate who serves as a lightning-rod diversion to distract people’s attention away from the actual hidden evil daemon that are manipulating our planet through wars, finance, false religion, and a reconditioning of our mental faculties....

...George Bush is not enemies with Osama bin Laden, Saddam Hussein, or even Al Gore and John Kerry. It’s all a con-job because these individuals are all on the same team, and they’re all serving the same masters in one capacity or another. And what is their ultimate goal as they sell their souls? Answer: to preserve the controlling elite’s status quo, and subsequently their positions of subservient power within it.

George Bush is merely a puppet; a figurehead; and an implementer....if YOU were running the world, would you let George W. Bush be the CEO? Hell, the Bushes don’t even trust him enough to run their own family business! So, in this sense, he’s nothing more than a dangling carrot that is used as either a figure of adoration for the kool-aid conservatives, or a symbol of disdain for the lockstep liberals....Yet for some inexplicable reason, many people who should know better still allow themselves to be bamboozled by this illusory left/right paradigm....

Please, remember: George Bush, Bill & Hillary Clinton, Ronald Reagan, and John Kerry are not (and were not) the ultimate idols and demons. They’re simply conduit/actors on the public stage who are advancing the goals of those behind the veil.... “What is essential is invisible to the eye.” In other words, the true fiends that are destroying our world and feeding off their hosts (that means us – everyday people) like parasitical vampires are far-removed from the glare of public exposure....

The key to remember is this: George Bush and his ilk are merely SYMPTOMS of evil; not the true CAUSE. If we really want the truth, we have to insist on looking further than what is standing right before us.

“9-11 on Trial”...will examine the government’s explanation of events following the terror attacks of September 11, 2001. Specifically, the focal point of these proceedings will be: did burning jet fuel cause the collapse of each World Trade Center tower? A subsequent trial in mid-to-late 2005 will take into consideration whether Flight 77 – a Boeing 757 – struck the Pentagon.

To prosecute this case, we are going to rely solely on verifiable scientific data of the highest order (as opposed to the obvious pitfalls associated with “theory”). In this sense, our focus will be exclusively directed at the CAUSE of the towers’ collapse, and not any peripheral SYMPTOMS.

We are engaging in this project for two primary reasons: (a) to counteract a “black hole” of sorts that has engulfed previous and/or current 9-11 lawsuits, all of which seem to be squashed, in limbo, or severely compromised; and (b) to show that this case can be proven in a court of law relying solely on verifiable scientific facts, physics, and the laws of nature.

At this point we have amassed mountains of data, but if anyone would like to submit material which fits the above-mentioned criteria, their contributions are most certainly welcome.

“9-11 on Trial” promises to be an historic event, for we will prove beyond a shadow of a doubt – in a courtroom setting for all the world to see – that the government’s explanation of events were nothing more than bold-faced lies.

FROM THE MOMENT the first airplane crashed into the World Trade Center on the morning of September 11, 2001, the world has asked one simple and compelling question: How could it happen?

Three and a half years later, not everyone is convinced we know the truth. Go to Google.com, type in the search phrase "World Trade Center conspiracy" and you'll get links to an estimated 628,000 Web sites. More than 3000 books on 9/11 have been published; many of them reject the official consensus that hijackers associated with Osama bin Laden and Al Qaeda flew passenger planes into U.S. landmarks.

Healthy skepticism, it seems, has curdled into paranoia. Wild conspiracy tales are peddled daily on the Internet, talk radio and in other media. Blurry photos, quotes taken out of context and sketchy eyewitness accounts have inspired a slew of elaborate theories: The Pentagon was struck by a missile; the World Trade Center was razed by demolition-style bombs; Flight 93 was shot down by a mysterious white jet. As outlandish as these claims may sound, they are increasingly accepted abroad and among extremists here in the United States.

To investigate 16 of the most prevalent claims made by conspiracy theorists, POPULAR MECHANICS assembled a team of nine researchers and reporters who, together with PM editors, consulted more than 70 professionals in fields that form the core content of this magazine, including aviation, engineering and the military.

In the end, we were able to debunk each of these assertions with hard evidence and a healthy dose of common sense. We learned that a few theories are based on something as innocent as a reporting error on that chaotic day. Others are the byproducts of cynical imaginations that aim to inject suspicion and animosity into public debate. Only by confronting such poisonous claims with irrefutable facts can we understand what really happened on a day that is forever seared into world history.--THE EDITORS

Letsroll911.org, another conspiracy-mongering outfit,tries to debunk the debunking by using impeachable witnesses, fuzzy images (into which one can see anything one wishes to see), and such impeccable logic as this:

Did you know that: Popular Mechanics is owned by Hearst Publications, and that the term "Yellow Journalism" came from shoddy reporting from Hearst Newspapers, most notoriously Hearst's promotion of the false claim that Spain had blown up the USS Maine in Havana harbor which was the pretext for the Spanish-American war...?

In other words, your grandfather was a horsethief, so you must be a wife-beater.

These 9/11 conspiracy theories, long popular abroad, are gradually--though more quietly--seeping into mainstream America. Allegations of U.S. complicity in the attacks have become standard fare on talk radio and among activists on both the extreme left and the extreme right of the political spectrum.

Which brings me to the Republic Broadcasting Network, another purveyor of non-stop conspiracy theorizing, which offers tidbits like these:

What Was Dick Cheney Doing on the Morning of September 11, 2001?

The Bush Doctrine is Israel's Doctrine

It's obvious to me, now, that the "controlling elite" that stands "behind the veil" is a capitalist, neo-Nazi, Zionist cabal. And all these years I thought it was only Frank Morgan. 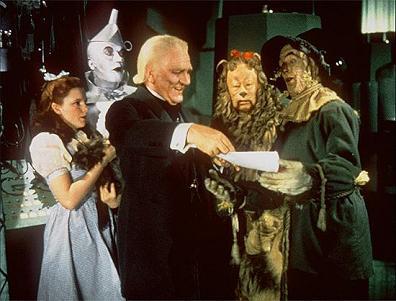 Dorothy (Judy Garland), the Tin Woodman (Jack Haley), the Cowardly Lion (Bert Lahr) and the Scarecrow (Ray Bolger) with the Wizard (Frank Morgan) in "The Wizard of Oz," distributed by Warner Bros.
Posted by Loquitur Veritatem at 1:54 PM