Arnold Kling points to a debate between Tyler Cowen and Max Sawicky about the future of the welfare state, at WSJ Online. Tyler would have won the debate hands down if he had shown, as I have, that free markets -- protected by strict enforcement of laws against force and fraud -- would make almost everyone wealthier. So much wealthier that they could easily afford to buy off the few remaining free-loaders.

But reason and facts seem unlikely to prevail. Sawicky is probably right when he says "Social Security and Medicare spending will increase faster than GDP, requiring increases in taxes, and there is not a damn thing anyone can do about it." Consider this headline: "Senate Passes Budget With Medicaid Intact."

I fear that we're faced with this: 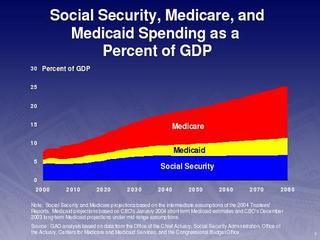 Where will it end? The United States will become a third-rate economic power, burdened by a massive welfare state and tied in knots by social and economic regulations. We are on The Road to Serfdom -- no doubt about it -- unless Congress takes my advice.
Posted by Loquitur Veritatem at 9:03 AM