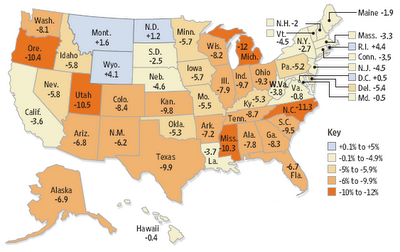 It appeared in the Detroit Free Press on August 30, and it was picked up quickly by the Left-blogosphere because it seems to discredit President Bush's economic policies. (For example, Kevin Drum (Political Animal) got the map from the Freep, John Campanelli at Daily Kos got it from Drum, and Benj Hellie at Leiter Reports linked to Campanelli's post.)

In case you missed it, Stuart Buck and Megan McArdle, in a September 14 piece at the DCExaminer, describe the map and discredit it -- as have other savvy observers. As Buck and McArdle explain,

the Detroit Free Press published a horrifying map showing huge losses in household income across America. Horrifying and totally wrong, that is.

According to the map, between 1999 and 2005 median household income had fallen in 46 states, sometimes by double digits, plunging by 6 percent in the U.S. as a whole.

We knew incomes had fallen slightly since the peak of the technology bubble. . . . But the declines shown on the map were shocking. The Free Press claimed that nine states, with a total of 75 million citizens, had seen median incomes plummet by roughly 10 percent.

More surprisingly, these figures didn’t match those in the Census Bureau’s Current Population Survey, or CPS, which showed that median household income in the US had fallen only 2.8 percent — and had risen in around 20 states, not four. Where, we wondered, had they gotten their figures?

An e-mail exchange with the journalists gave us the answer: They had taken their 2005 numbers not from the CPS, but from the American Community Survey, a new research product that is scheduled to replace the detailed “long form” census collected every decade. But they hadn’t taken the 1999 figures from the ACS — in fact, the ACS is so new that it didn’t even publish nationwide data for 1999. Instead, the journalists had taken the 1999 income figures from the official 2000 census.

Some statisticians already will be shaking their heads in dismay; different surveys, taken at different times and asking slightly different questions, often produce very different pictures of the economy. If the journalists had checked the helpful section of the Census Bureau Web site called “Using the Data”, they would have discovered this warning: “Users should exercise care when comparing income figures from the American Community Survey with those of Census 2000.”

They might also have found another Census Web page warning that “[E]stimates from any one survey will almost never exactly match the estimates from any other (unless explicitly controlled), because of differences such as in questionnaires, data collection methodology, reference period, and edit procedures.” Or had they Googled “Comparing the ACS and the Census,” they’d have discovered a helpful document on the comparison problems, available from multiple state governments. It calls the two income numbers “not comparable.”

With good reason. A 2003 report by census staff indicated that median incomes from the ACS were much lower than those from the 2000 census: 4.4 percent lower for the United States.

What does this mean? Simple: If you start with income from the 2000 census, and then compare it to income from the 2005 ACS, which we know tends to be much lower because of survey differences — you’ll find a much greater decline than really was the case. Much of the reported 6 percent drop — probably more than half — comes from comparing apples to oranges.

There's more to be said, however, and I said it on September 5 in a comment on a post at AnalPhilosopher. Here are the key points of my comment, which I have edited to focus on the issues at hand:

The use of the period 1999 to 2005 amounts to cherry-picking the data. (The use of incompatible data sets, of which I was unaware at the time of my comment, merely compounded the cherry-picking.) Specifically, real median household income in the U.S. declined from 1999 -- while Bill Clinton was president -- through 2004, then rose in 2005, though the 2005 level was below the 1999 level. (To see what I am talking about, open this Census Bureau report and go to Figure 1, which I have reproduced below.)

The 1999-2004 decline is typical of a long-standing pattern, one that the figure below depicts only as far back as 1967. Even in the relatively brief period since 1967 there have been dips in real median household income more severe than that of 1999-2004. There is nothing at all unusual about a temporary dip in real median household income; it is part of the natural cycle of long-term economic growth. (Leftists like to imagine that there's an alternative to such cycles, which involves the counter-productive fine-tuning of the economy by an omniscient Left-wing government or the even more destructive practice of income redistribution.)

The fact that some States (e.g., Michigan) fared worse than others during the recent downturn can be attributed to Michigan's particularly benighted economic policies (e.g., high taxation and unionization), which have been impoverishing Michiganders for decades.

"The Sick Man of the Midwest: Michigan -- a liberal failure," by Rich Lowry at NRO, confirms my point about Michigan. Lowry reports:

According to the free-market Mackinac Center for Public Policy’s analysis of United Van Lines data, Michigan is now the No. 1 state in the continental United States for outbound traffic. An estimated 65 percent of the moving company’s Michigan interstate traffic is families moving out of the state, headed to more economically open and vital destinations. As an official in Wyoming put it, “Michigan has been very good for us.” . . .

Michael LaFaive of the Mackinac Center calls Michigan “the France of North America.” Economically competitive states might have a personal income tax, or corporate income tax, or sales tax — Michigan has all three. It has long been the only state with a European-style, value-added tax — the Single Business Tax. A company can be in bankruptcy and still have a tax liability, making Michigan a bad state even to lose money in. In a 2002 filing for relief from the tax, General Motors explained that it would operate at a loss, but one of its projects would still create a $7 million-a-year tax liability. . . .

Meanwhile, unions make the state an inhospitable place to do business. A company can be bankrupt in Michigan and still face threats of a strike, as Northwest Airlines and the auto-parts maker Delphi have learned. Michigan’s unionization rate of 21.8 percent is much higher than the national average of 13.5 percent. This accounts for it having the second-highest unit-labor cost in the nation, according to the Mackinac Center. States with right-to-work laws, and consequently less unionization, experience more growth and create more jobs, at the expense of troglodytes like Michigan.

It used to be that unions could force unnaturally high wages and benefits on U.S. manufacturers, and the costs would be passed along to consumers. Those were the days prior to globalization when the U.S. auto industry had a lock on the domestic market and experienced little international competition. It was inevitable that Michigan would find the new competition disruptive, but not that it would react to it so poorly.

The way to thrive in a globalized environment is to create a low-tax economy without the rigidities that come with heavy unionization and regulation. For those who disagree, Michigan beckons.

Addendum: See also this post at The Club for Growth blog.

Here's the figure from the Census Bureau report: 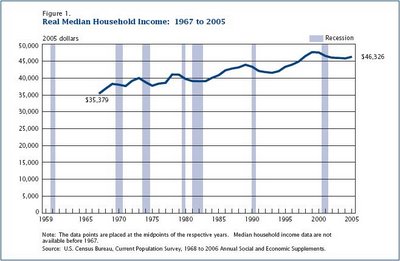 Posted by Loquitur Veritatem at 5:44 PM