How to View Defense Spending

Jeffrey Tucker, one of the inmates of the Mises Economics Blog, posts "Why Libertarians Should Care about Defense." The entire post consists of this chart: 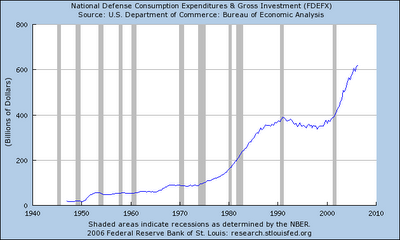 Because Tucker doesn't state the point of the chart, I'll have to read his mind. He's probably trying to convey a message like this:

Defense spending, unlike domestic spending is driven by the outside world, by what others could or would do to us, regardless of our delusions about their benignity. It is necessary to spend a lot on defense even when we are not at war, for two reasons: deterrence and preparedness. With that thought in mind, let's look at three indices of real (inflation-adjusted) government spending: defense, federal nondefense, and state and local -- the red, black, and blue lines, respectively: 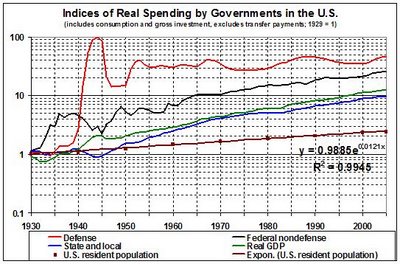 What does the chart suggest? Several things:

In sum, having becoming locked into the regulatory-welfare state via the New Deal and Great Society, nondefense spending at the federal, state, and local levels has kept pace with what we can "afford" to spend on programs that actually destroy income and wealth. By contrast, defense spending has fluctuated around a high but necessary level, a level that we are much better able to afford now than we were in the days of World War II.

It is customary in democratic countries to deplore expenditures on armaments as conflicting with the requirements of the social services. There is a tendency to forget that the most important social service that a government can do for its people is to keep them alive and free.

-- Marshal of the Royal Air Force Sir John Slessor, in Strategy for the West

Related posts:
Not Enough Boots
Defense as the Ultimate Social Service
I Have an Idea
The Price of Liberty

Posted by Loquitur Veritatem at 5:15 PM