This is the concluding installment of a series. The other entries are "Liberty as a Social Compact," "Social Norms and Liberty," "A Footnote about Liberty and the Social Compact," and "Liberty and Federalism." The series is an elaboration of an earlier post, "The Paradox of Libertarianism," which could be read as an introduction. The entire series can be read as a single post, here.

Exit Is the Key 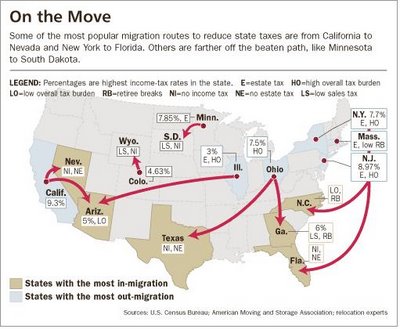 But, today, the 50 States (and their constituent municipalities) are incompatible with the kind of federalism envisioned by the Framers. Today's State and municipal governments are too bureaucratic and too beholden to special interests; they have become smaller versions of the federal government. A devolution of power to the States would advance liberty in some States, but it would fall well short of reversing the depradations of liberty that began in earnest with the New Deal. For, in today's populous States and municipalities, coalitions of minority interests are able to tyrannize the populace. (The average State today controls the destinies of 25 times as many persons as did the average State of 1790.) Those Americans who "vote with their feet" do not escape to regimes of liberty so much as they escape to regimes that are less tyrannical than the ones in which they had been living.

The kind of federalism envisioned by the Framers -- and the kind of federalism necessary to liberty -- would require the devolution to small communities and neighborhoods of all but a few powers: war-making, the conduct of foreign affairs, and the regulation of inter-community commerce for the sole purpose of ensuring against the erection of barriers to trade. With that kind of federalism, the free markets of ideas and commerce would enable individuals to live in those communities and neighborhoods that best serve their particular conceptions of liberty. (To grasp this critical point, please read or re-read the preceding installments of this series: here, here, here, and here.)

A "Modest" Proposal for an Experiment in Liberty

Unfortunately, most proponents of federalism remain fixated on the State as the common denominator. Consider the Free State Project,

an agreement among 20,000 pro-liberty activists to move to New Hampshire, where they will exert the fullest practical effort toward the creation of a society in which the maximum role of government is the protection of life, liberty, and property. The success of the Project would likely entail reductions in taxation and regulation, reforms at all levels of government to expand individual rights and free markets, and a restoration of constitutional federalism, demonstrating the benefits of liberty to the rest of the nation and the world.

After obtaining 5,000 committed members, the FSP membership voted and chose New Hampshire. The vote was conducted in accordance with the Participation Guidelines; detailed results of the vote may be found here. The FSP membership selected New Hampshire because of its many political, economic, and cultural advantages, which can be seen in our NH Info page. In addition, New Hampshire's low population ensures that each individual can have an effect on the political system.

Why not Missouri, which has an excellent index of economic freedom, celebrates an early tax freedom day, and generally has better weather than New Hampshire (except for skiing). Better yet, why not a county or city in a State like Missouri? Best yet, why not convince the federal government and a State to perform an experiment by allowing the establishment of a "zone of liberty" within a State -- an experiment in liberty, if you will. If it succeeds, others will flock to it or demand the establishment of similar zones of liberty. If it fails . . . well, that seems unlikely.

What do I have in mind? A zone of liberty would be something like a "new city" -- with a big difference. Uninhabited land would be acquired by a wealthy lover (or lovers) of liberty (call him or them the "developer"). The zone would be populated initially by immigrants, who would buy parcels of land from the developer, and who would be allowed to build the home or business of their choosing on the land that they buy. Sub-developers would be allowed to acquire large parcels, subdivide those parcels, and attach perpetual covenants to the use of the subdivided parcels -- covenants that initial and subsequent buyers would knowingly accept. Absentee ownership would be prohibited.

The Moral of the Story

The bottom line of this series:
It is easy to say that liberty consists of doing what we please as long as what we do does not bring harm to others. It is very hard to say what will and will not do harm. Socially evolved norms offer the best guide. We ignore and summarily reject those norms at great peril to liberty.

The simplistic definition of liberty -- do as you please but do no harm to others -- is superficially appealing. But it glides over the definition of harm, which may vary widely from group to group. Those who advocate abortion and same-sex marriage, for instance, may see those practices as harmless, but they fail to take into account the downstream effects of those practices on civility, without which life would be "solitary, poor, nasty, brutish, and short."

That is why it is so important to devolve most governmental power to small groups. Doing so enables exit and makes it more likely that leaving will be rewarded by finding membership in a more congenial group. (For that reason I would constrain the size and membership of each zone of liberty, creating more of them instead of allowing any one of them to grow beyond the size of a small village -- perhaps not exceeding a population of 150.)

In conclusion, true liberty can be found in these four rules:

Posted by Loquitur Veritatem at 7:23 PM