Yesterday's post about "Red-Brick Buildings" reminds me of "Memories of a Catholic Boyhood," Chapter One of Garry Wills's Bare Ruined Choirs.* There, Wills could be writing about my boyhood. I hasten to add that I don't agree with Wills's politics or his juvenile attitude toward the Church, the many traces of which I have excised from the following excerpts of his "Memories."

We grew up different. There were some places we went; and others did not -- into the confessional box, for instance. . . .

We "born Catholics," even when we leave or lose our own church rarely feel at home in any other. The habits of childhood are tenacious, and Catholicism was first experienced by us as a vast set of intermeshed childhood habits -- prayers offered, heads ducked in unison, crossings, chants, christenings, grace at meals, beads, altar, incense, candles . . . churches lit and darkened, clothed and stripped, to the rhythm of liturgical recurrences . . . .

One lived, then, in contact with something outside time -- grace, sin, confession, communion, one's own little moral wheel kept turning in the large wheel of seasons that moved endlessly, sameness in change and change in sameness, so was it ever, so would it always be . . . .

We came in winter, out of the dark into vestibule semidark, where peeled-off galoshes spread a slush across the floor. We took off gloves and scarves, hands still too cold to dip them in the holy water font. Already the children's lunches, left to steam on the bare radiator, emanated smells of painted metal, of heated bananas, of bolgna and mayonnaise. . . .

Or midnight Mass -- the first time one has been out so late . . . . The crib is dimmed-blue, suggesting Christmas night, and banked evergreen trees give off a rare outdoors odor inside the church . . . .

The bigger churches, with windows of a richly muddied color -- fine gloom up behind the altar . . . .

Certain things are not communicable. One cannot explain to others, or even to oneself, how burnt stuff rubbed on on the forehead could be balm for the mind. . . .

All these things were shared, part of community life, not a rare isolated joy, like reading poems. These moments belonged to a people, not to oneself. It was a ghetto, undeniably. But not a bad ghetto to grow up in. 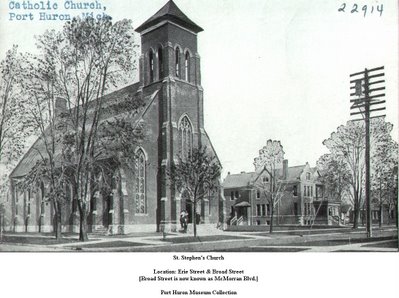 St. Stephen Church, where I was a parishoner in the late 1940s and early 1950s, occupied an entire block in my home town. Behind the church and rectory (left and right) was the school where I took catechism lessons on Saturday mornings.
__________
* Wills takes his title from a phrase in Shakespeare's Sonnet 73:

That time of year thou mayst in me behold
When yellow leaves, or none, or few, do hang
Upon those boughs which shake against the cold,
Bare ruined choirs, where late the sweet birds sang.
In me thou see'st the twilight of such day
As after sunset fadeth in the west;
Which by and by black night doth take away,
Death's second self, that seals up all in rest.
In me thou see'st the glowing of such fire,
That on the ashes of his youth doth lie,
As the death-bed, whereon it must expire,
Consumed with that which it was nourish'd by.
This thou perceiv'st, which makes thy love more strong,
To love that well, which thou must leave ere long.

Posted by Loquitur Veritatem at 9:00 PM