In Freakonomics, Steven Levitt rehashed an earlier paper he wrote with John Donohue, in which the two economists posit a strong relationship between the legalization of abortion in the early 1970s and the drop in the crime rate, which began around 1990. Here's how The Washington Post summarizes what Freakonomics has to say about the relationship between abortion and crime:

. . . First, Freakonomics shows that although commonly cited factors such as improved policing tactics, more felons kept in prison and the declining popularity of crack account for some of the national reduction in crime that began in about the year 1990, none of these completes the explanation. (New York City and San Diego have enjoyed about the same percentage decrease in crime, for instance, though the former adopted new policing tactics and the latter did not.) What was the significance of the year 1990, Levitt asks? That was about 16 years after Roe v. Wade . Studies consistently show that a disproportionate number of crimes are committed by those raised in broken homes or who were unwanted as children. When abortion became legal nationally, Levitt theorizes, births of unwanted children declined; 16 years later crime began to decline, as around age 16 is the point at which many once-innocent boys start their descent into the criminal life. Leavitt's [sic] clincher point is that the crime drop commenced approximately five years sooner in Alaska, California, Hawaii, New York and Washington state than it did in the nation as a whole. What do these states have in common? All legalized abortion about five years before Roe .

Levitt has defended his findings against some well-qualified critics, most notably Steve Sailer (see here, here, here, and here, for example) and economists Christopher L. Foote and Christopher F. Goetz. If you're interested in the minutiae of the debate, go here, where Levitt also discusses the sideshow involving Bill Bennett. Bennett, as you recall, created a stir with this colloquy during the September 28, 2005, broadcast of Salem Radio Network's Bill Bennett'’s Morning in America:

BENNETT: . . . one of the arguments in this book Freakonomics that they make is that the declining crime rate, you know, they deal with this hypothesis, that one of the reasons crime is down is that abortion is up. Well . . .—

CALLER: Well, I don'’t think that statistic is accurate.

BENNETT: Well, I don'’t think it is either, I don'’t think it is either, because first of all, there is just too much that you don't know. But I do know that it'’s true that if you wanted to reduce crime, you could . . . —if that were your sole purpose, you could abort every black baby in this country, and your crime rate would go down. That would be an impossible, ridiculous, and morally reprehensible thing to do, but your crime rate would go down. So these far-out, these far-reaching, extensive extrapolations are, I think, tricky.

Rather than rehash all the debates about Levitt's work and Bennett's statement, I decided to take a fresh look at the numbers. I drew on the U.S. Census Bureau's "Mini-Historical Statistics" to derive the following statistics for the United States (each descriptor links to the Excel spreadsheet from which I derived the relevant statistics): 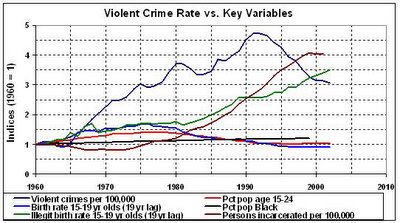 The years represented in the regression are 1960-99 (the last year of data on Blacks as a fraction of the population).

That equation is especially compelling because both explanatory variables are statistically signficant even though they are strongly correlated (R = 0.84). Given that, and the evidence of the plots above -- in which the declining crime rate is accompanied by a rising incarceration rate -- two things are evident: incarceration is the key to crime reduction, and abortion has no place in the discussion of crime. What happened was that the incarceration rate finally became high enough, around 1991, to offset the countervailing influences on crime.

Incarceration follows from prosecution, which follows from investigation. I therefore stand by my earlier conclusion that "incarceration and spending on the criminal justice system . . . . are the public-policy weapons of choice" when it comes to fighting crime.

UPDATE (01/04/06): None of my regressions (not even the best one) fully accounts for the sharp decline in the violent-crime rate after 1990. That is because I did not try to model the effects of concerted efforts, since the late 1980s, to put violent offenders behind bars and to keep them there longer. The missing variable, of course, is to be found in the effectiveness of federal sentencing guidelines, which were enacted in 1987 and declared constitutional by the U.S. Supreme Court in 1989. Liberal do-gooders and their allies on the bench nevertheless persuaded the Supreme Court last year (in a pair of related cases) to find the guidelines unconstitutional and, therefore, only advisory rather than mandatory.

Given the inevitability of more lenient sentencing in many jurisdictions, I predict that the violent-crime rate will resume its long-term ascent. That ascent will mirror the continuing destruction of civil society at the hands of liberals -- and those libertarians who seem unable to grasp the notion that liberty must be defended, at home and abroad.

UPDATE (01/05/06): In light of the preceding update I ran separate regressions on the violent crime rate for two periods: 1960-89 and 1990-2001, 1990 being the first full year under the federal sentencing guidelines. The best regression for 1960-89 has the same two explanatory variables above. The best regression for 1990-2001 (the last year of my series on incarceration rate) has only one explanatory variable: number of persons incarcerated per 100,000 of population. The graph below gives plots of the following statistics and regression estimates:
Estimate 3 further convinces me that more punishment means less crime, and that we are about to see a resurgence of violent crime because punishment has become less certain. 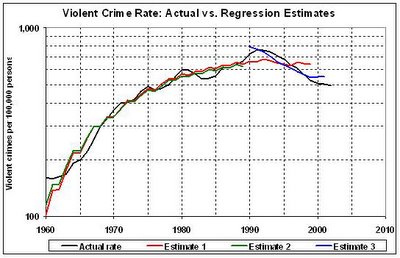 P.S., here are the numbers:

The years represented in the regression are 1960-89, as explained in this update.

The years represented in the regression are 1990-2001, as explained in this update.

The "Black" variable drops out of #3 because it is almost constant during the relevant period. It is "working" in the background to produce a high crime rate, but the "incarceration" variable has a measurable countervailing effect on crime.