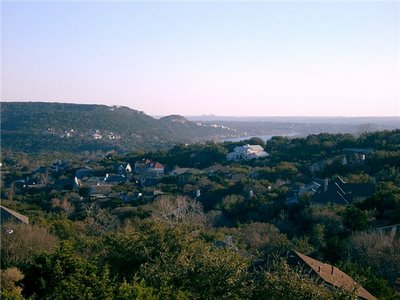 . . . in Austin: temperature 86 degrees, ceiling unlimited, visibility limited only by your elevation.

The haziness is caused what the locals call "cedar" pollen, which is really the pollen of the Ashe Juniper. The juniper grows profusely in central Texas and emits copious quantities of pollen in late December and early January. Persons who are especially allergic to the pollen are said to suffer "cedar fever."

The body of water visible in the center of the photo is Lake Austin, which is one of several lakes that were created by damming the Colorado River (the one that rises in Texas and flows to the Gulf of Mexico). The undammed Colorado isn't much more than a stream, by my standards, and Lake Austin is a glorified pond. Lake Austin, at its widest, is perhaps a quarter-mile wide, which is only about one-fourth the width of the St. Clair River, near which I grew up. The St. Clair flows from Lake Huron, which is about 200 miles long and 200 miles wide, at its widest point.

That's why I'm here and not there.
Posted by Loquitur Veritatem at 4:50 PM