Wayne (The Great One) Gretzky holds the all-time goal-scoring record for major-league hockey:
The raw numbers suggest that Gretzky far surpassed Gordie (Mr. Hockey) Howe, who finished his much longer career with the following numbers:
That makes Gretzky the greater goal scorer, eh? Not so fast. Comparing Gretzky's raw numbers with those of Howe is like comparing Pete Rose's total base hits (4,256) with Ty Cobb's (4,191), without mentioning that Rose compiled his hits in far more at-bats (14,053) than Cobb (11,429). Thus Cobb's lifetime average of .367 far surpasses Rose's average of .303. Moreover, Cobb compiled his higher average in an era when batting averages were generally lower than they were in Rose's era. 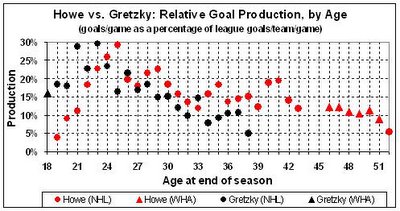 Gretzky got off to a faster start than Howe, but Howe has the better record from age 24 onward. Gretzky played 20 NHL seasons, the first ending when he was 19 years old and the last ending when he was 38 years old. Over the comparable 20-season span, Howe scored 5 percent more adjusted goals than did Gretzky. Moreover:
Gordie Howe is not only Mister Hockey, he is also Mister Goal Scorer. "No doot aboot it."
____________
* This writer, whose method is more complex than mine, gives Howe a 21-percent advantage over Gretzky for their respective NHL careers.

** I have omitted from these calculations Gretzky's 3 goals in 8 games at the end of the 1978-79 WHA season.
Posted by Loquitur Veritatem at 5:52 PM