According to economist Dani Rodrik, the author of the following graph (one Larry Bartels) claims to have shown that

[w]hen a Republican president is in power, people at the top of the income distribution experience much larger real income gains than those at the bottom--a difference of 1.5 percent per year going from the bottom to the top quintile in the income distribution. The situation is reversed when a Democrat is in power: those who benefit the most are the lower income groups. 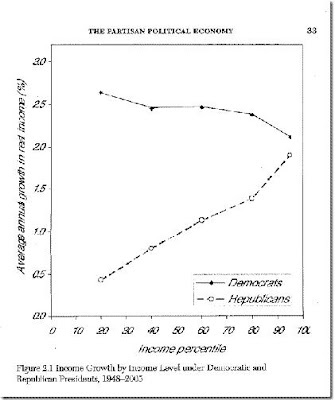 As I discuss below, the graph is deceptive because of the period it encompasses. Taking into account the downward trend in real GDP growth that began a century ago, and the timing of Democrat and Republican presidencies from Truman's second term onward, the graph shows only this: Republican presidents (when they had congressional support) enacted tax and regulatory policies that encouraged economic growth. The rewards of stronger growth, naturally, went mainly (though not exclusively) to those who contributed the most to growth, namely, risk-takers and highly skilled persons. Conversely, Democrat presidents (when they had congressional support, which was more often) enacted tax and regulatory policies that discouraged economic growth, which harmed high earners more than low earners.

Nor is this table conclusive of anything: 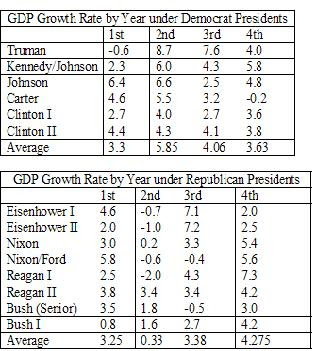 The preceding graph and table both mask the long, downward trend in the real rate of GDP growth, which I document in this post. Thus: 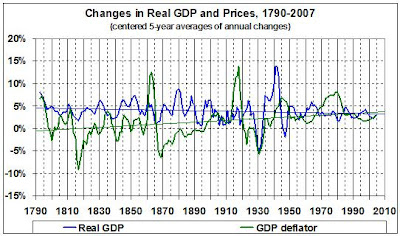 Why the downward trend in real GDP growth? See this post. In sum, the downward trend is due to the policies of (most) presidents and Congresses since the early 1900s: deliberate expansion of the regulatory-welfare state, with almost no opposition from the Supreme Court after the mid-1930s.

Here's a closer look at the GDP trend since Truman's first year as an elected president: 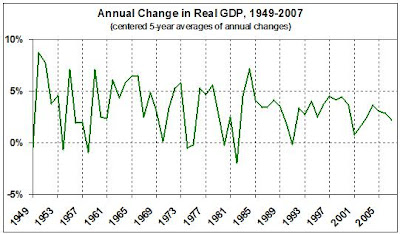 Source: Year-over-year changes in real GDP computed from estimates of real GDP available at Louis D. Johnston and Samuel H. Williamson, "What Was the U.S. GDP Then?" MeasuringWorth.Com, 2008.

As an additional piece of evidence for that proposition, I offer this: The strongest correlation between the year of a presidential term (i.e., first, second, etc.) and real GDP growth during 1949-2007 does not involve a one-year lag (as Dani Rodrik's post suggests) but a one-year lead. There is a positive statistical relationship between growth rate and Democrat presidencies for the period 1949-2007 only because Democrats sat in the White House in half of the years from 1949 through 1981 and less than a third of the years after that. But Democrats weren't responsible for the higher growth rate of those earlier years. They were, if anything, responsible for the lower growth rate of the later years. It took decades for the cumulative regulatory and redistributive effects of the New Deal, Fair Deal, and Great Society to be felt. But felt they were, eventually, even during the years of the so-called Clinton boom -- when the liar-in-chief compounded them.

A more useful analysis of the influence of government policy on growth is found in this post. It is about the Laffer curve and the real stimulus afforded by tax cuts, regardless of the president's party affiliation.

UPDATE: Paul Krugman, of course, is eager to believe the pseudo-relationship "discovered" by Bartels.

SECOND UPDATE: An analysis by The Corner's Jim Manzi corroborates my points.
Posted by Loquitur Veritatem at 6:20 PM