An Honest Woman Speaks Out

The "My Turn" feature in the April 14 issue of Newsweek offers "I Am Not the Enemy," by Felicia J. Nu'Man. She writes so compellingly and wisely that I am tempted to reproduce her every word. But I won't. Here's a sample:

I battle crime every day, and I defend myself every day, too. I'm a [__] prosecutor in Louisville, Ky. I have presented cases before juries, but from my first day on the job I have felt that I have been on trial in the court of public opinion. Even my maternal grandmother once asked if I was a Republican (I'm not), while others just asked the ultimate question: how can you put our [__] men in jail?

Depending on my mood, the answer can be a three-part speech on the decay of moral values, educational-attainment levels and teenage motherhood. Other times I simply tell them the defendants put themselves in the penitentiary and I facilitated their exodus from the community. Or better yet, my favorite answer: I didn't put the crack in their pocket and a gun in the other....

My job is not that of a social worker or a social scientist. I was hired to enforce the laws as drafted. I have a duty to the citizens of the Commonwealth of Kentucky, including all the [__] victims of the drug culture. These victims are not just the dead rival drug dealers but the addicted mothers who neglect their children, the neglected children themselves and the overburdened extended families who care for these addicts and their children.

...Race does not enter the equation for me. My question to these [__] people who believe me to be a traitor is, when will you connect the dots? Please realize, the police and the prosecutors are not the problem; it is the criminals in these depressed neighborhoods who are.

...Of course, [__] people are treated unfairly. Of course, the inner cities have a decaying infrastructure. But there is absolutely no reason to break a reasonable, appropriate law. None. The alternative is chaos.

If you hadn't guessed, my underscoring replaces the word "black." And Nu'Man is a brave and wise woman who happens to be black: 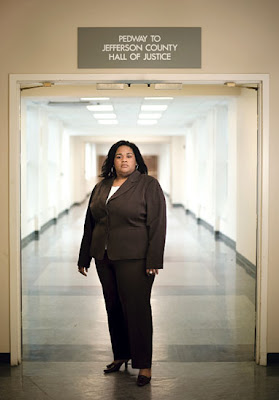 Posted by Loquitur Veritatem at 5:55 PM