UPDATED TO INCLUDE FINAL STATS FOR 2007 REGULAR SEASON

Here are the top eleven home-run hitters in the history of major league baseball,* based on home runs as a percentage of times at bat over the course of a career:


The list includes six active players (Bonds, Thome, Rodriguez, Ramirez, Sosa, Griffey) and one retired player (McGwire) who was a contemporary of the active players. Here are the stats for those seven players, by season: 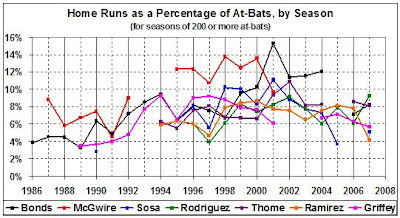 Here's why I don't think so, namely, the stats for the same seven players, by age: 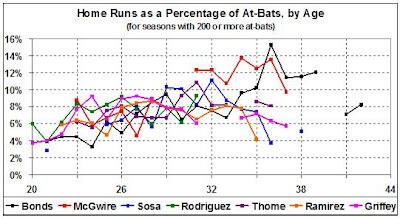 So, we have five sluggers (Sosa, Rodriguez, Thome, Ramirez, Griffey) who seem to have aged more or less normally (allowing for injuries). Then, we have the "big two" (McGwire and Bonds) whose late-career "accomplishments" stand out from the rest.

Perhaps the "big two" really aren't that unusual. How do they compare with the older members of the top-eleven club, for instance? Here's how: 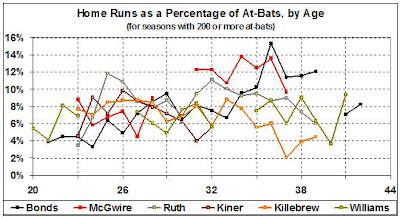 As the late Phil Rizzuto would say, "Holy cow, would you look at that!" Or, as Detective Delvecchio (of Barney Miller) used to say, "What an amazing coincidence!" Two guys who "peaked" late, one right after the other.
__________
*Source and notes: All statistics are derived from Baseball-Reference.com and are current through the end of the 2007 regular season. I have excluded two active players -- Adam Dunn (career, 7.04%) and Albert Pujols (career, 6.96%) -- who are less than 30 years of age and have compiled far fewer at-bats than the players whose records I analyze here.

Posted by Loquitur Veritatem at 7:40 PM