Austin: Not the Live Music Captial of the World

The City of Austin likes to claim that Austin is "The Live Music Capital of the World." I suppose that's a more palatable claim than the more apt description, "The People's Republic of Austin." That moniker is owed to the predilections of Austin's all-Democrat city council, which dispenses taxpayers' money like manna from city hall, itself a monstrous monument to Austin's commissariat: 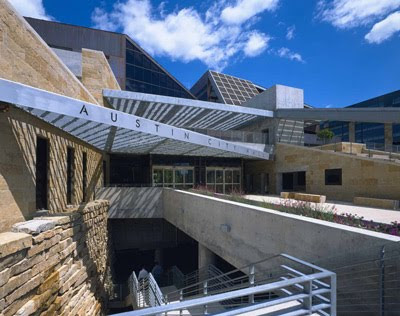 Austin is the capital of Texas. Well, more precisely, the Capitol of Texas is in Austin. But that's a historical accident. Austin is to the rest of Texas (Houston excepted) as George W. Bush is to MoveOn.org.
Posted by Loquitur Veritatem at 10:25 AM