Michell Malkin reminds us that the Miami plot is one of a series involving black Muslims. There's more to the story than terror. There's also a cultural divide to be reckoned with.

Yes, there is a cultural divide in the country -- one that is perhaps deeper and more serious than the schism between the Left and the rest. The other divide -- the black-white divide -- is an old one that continues to this day, in spite of (and to some degree because of) the forced desegregation of private establishments, the perversion of the Voting Rights Act, affirmative action, and kid-gloves treatment by the media. The black-white divide has fostered the phenomenon known as "white flight," which is evident in the following statistics: 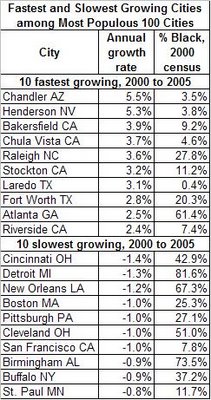 Sources: Fastest and slowest growing cities and rates of growth derived from U.S. Census Bureau release of June 21, 2006, Table 1: Annual Estimates of the Population for Incorporated Places over 100,000, Ranked by July 1, 2005 Population: April 1, 2000 to July 1, 2005 (SUB-EST2005-01). Blacks as a percentage of each city's population derived from "fact sheets" at U.S. Census Bureau's American Fact Finder site (e.g., the "fact sheet" for St. Paul, Minnesota). Note: Persons counted as "black alone" (not also of other races and/or ethnic groups) comprised 12.3 percent of the population of the United States at the time of Census 2000.

There has been, of course, a general shift of population toward the South and West (see this), which the first half of the table reflects, in part. But for decades there also has been an exodus of whites from cities that have large black populations -- an exodus that continues, as the second half of the table indicates. Not only do most of the fastest growing cities have relatively small black populations, but most of the slowest growing cities have relatively large black populations. ("Outliers" such as Atlanta and San Francisco should be ignored; the story lies in the overall pattern, not in the exceptions.)

"White flight," de facto segregation, and cultural animosity will continue for as long as blacks generally marginalize themselves. For that is what a minority culture does to itself when it breeds crime, riots, and (now, it seems) terror plots.

Posted by Loquitur Veritatem at 12:00 PM