I wrote recently about the apparent superiority of Red States over Blue States when it comes to charitable giving. Subsequent posts by Stephen Bainbridge and Gail Heriot prompted me to look more closely at the numbers behind the numbers that I cited.

I went to Generosity Index at the Catalogue for Philanthropy, where I found the underlying data about itemized charitable contributions vs. income, by State. The measure of income used to compute the Generosity Index is adjusted gross income. To get a truer picture of the propensity to give to charity, I converted adjusted gross income to after-tax income by calculating and applying an effective tax rate for each State based on its Tax Freedom Day (detailed data here). With that result in hand I calculated each State's average itemized charitable contributions as a percentage of average after-tax income. I plotted that statistic against the percentage of votes cast for Bush in 2004, by State.

The relationship between after-tax giving and Bush votes is indicated by the black plot points in the following graph: 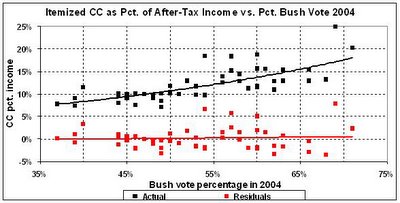 The best regression fit for the relationship between after-tax charitable giving and Bush votes is an exponential (the black line):

The exponential fit indicates that the rate of after-tax giving accelerates as the percentage of Bush votes increases. Moreover, the fit -- as good as it is -- understates the rate of acceleration, as can be seen by inspecting the residuals (the differences between the regression estimates and the actual data), which are plotted in red. Note that the four largest residuals are positive (that is, the equation underestimates charitable giving) and represent pro-Bush States, with vote percentages of 54, 57, 60, and 69. 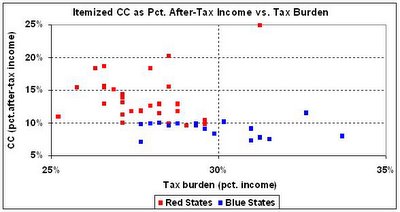 Posted by Loquitur Veritatem at 2:03 PM