The subtitle of this post might be: Things you never needed to know about the presidents of the United States. To enlarge a graph, right-click on it and select "open in a new tab." 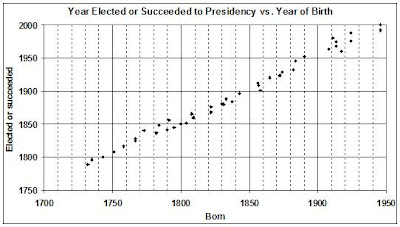 The longest gap is the most recent. Carter and G.H.W. Bush were born in 1924; Clinton and G.W. Bush were born in 1946. That's a gap of 22 years -- an entire generation (mine) deprived of a presidency. No fair! What's worse, my generation is unlikely ever to have a president because by 2008 the youngest member will be 63 -- not an impossible age for election to the presidency, but an unlikely age. Perhaps our last (best?) hope is Rudolph Giuliani, who was born in 1944. UPDATE (11/05/05): I suppressed the name of John McCain (born 1936) because I associate him first, last, and always with McCain-Feingold, that unconstitutional piece of incumbent-protecting legislation. McCain, who will be 72 in 2008 may well run for president again, but perhaps by then his age will be held against him. One can only hope. UPDATE (03/25/08): Well, McCain may be the next president. Whether he faces Barack Obama or Hillary Clinton in November matters not to me; he will be the lesser of two evils, in either event.

The next graph highlights trends (such as they are) in the age at which presidents have died (or to which they have survived if still living), the age at which they were elected or succeeded to the presidency, and the number of years by which they survived (or have thus far survived) election or succession. (I have omitted assassinated presidents from the data for age of death and number of years surviving, thus the gaps in the first and third series.) 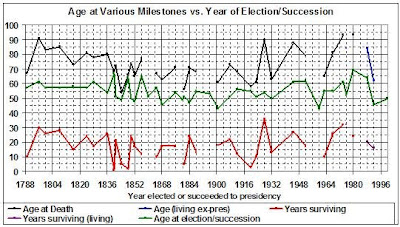 It seems to me that the early presidents were generally "healthy and wise" (and wealthy, by the standards of their time). That is, they were of superior genetic stock, relative to the average person. Their successors have tended to be of less-superior stock, and it shows in the downward trends after 1836.

The general rise in life expectancies since 1900 masks the relative inferiority of twentieth century presidents. The rising age of accession to the presidency after 1932 and the rise in years of survivorship after 1924 (both with wide variations around the trend) should not be taken to indicate that presidents of the twentieth century are on a par, genetically, with the early presidents. They are not.
Posted by Loquitur Veritatem at 11:19 AM