Alex Tabarrok at Marginal Revolution points to a presentation in which this graphic appears: 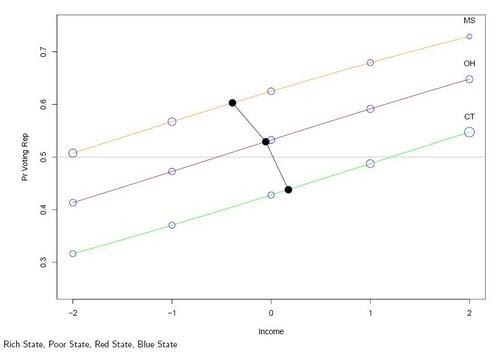 Standard deviations from mean income on the X-axis, probability of voting Republican on the Y-axis. Data plotted here are for counties in Mississippi, Ohio, and Connecticut (being "poor," "average," and "rich" States, respectively).

That graphic is supposed to clinch this point (Tabarrok is writing):

We all know that in the recent election poorer states tended to vote Republican while richer states tended to vote Democrat. On the basis of the famous maps many people jumped to the conclusion that poorer individuals were voting Republican (Nascar Republicans) while richer individuals were voting Democrat (trust fund Democrats). But the inference is a fallacy, the ecological fallacy. In fact, high-income individuals, as opposed to high-income states, vote Republican with greater likelihood than low-income individuals (the effect is not huge and it may be declining but it is significant). It's even true that rich counties tend to vote Republican with greater likelihood than poorer counties. Gelman links to this graph which nicely illustrates the ecological fallacy. The three lines show that within each state higher-income counties are more likely to vote Republican but when you look between states the correlation between income and voting Republican is negative.

Actually, when I saw the geographic distribution of votes in the 2004 election, by State and county, I didn't "jump[ ] to the conclusion that poorer individuals were voting Republican (Nascar Republicans) while richer individuals were voting Democrat (trust fund Democrats)." I drew the more reasonable inference that there is a strong geographic correlation between values and voting preferences; that is, adherence to the tenets of the regulatory-welfare state is stronger in richer States, at every income level. And that's precisely what the graphic indicates: Where you live does make a difference in how you vote.

Why? Here's my take: The "rich" in the rich States -- as is obvious from casual reading about limousine liberals and wannabe limousine liberals in New York and California -- have by and large bought into the regulatory-welfare state, which is mainly a creation of the Democrat Party. So, the rich-State rich vote their "consciences" or, rather, they tend to vote Democrat because the think they can
At the other end of the scale, low-income NASCAR fans who live in rich States are more likely to vote Democrat than low-income NASCAR fans who live in poor States.

The same principle applies to academia. Conservative and libertarian intellectuals tend to avoid academic careers (call it pre-emptive migration) because they don't want to adapt their thinking to fit in with the liberal supermajority on most campuses. Thank goodness there are some campuses (such as George Mason University) that are friendly havens for libertarian-conservative academics like Tabarrok and his blogging partner, Tyler Cowen.
Posted by Loquitur Veritatem at 4:51 PM