An Exercise in Futility

The Libertarian Party's presidential candidate in 1980, Ed Clark, received about 1.1 percent of the popular votes cast in the presidential election. That election marked the first appearance of the LP candidate on the ballots of 50 States, up from 2 States in 1972 and 32 States in 1976. The LP candidate has been on the ballot of 50 States, or nearly that, in every election since 1980, excepting the election of 1984 (39 States). 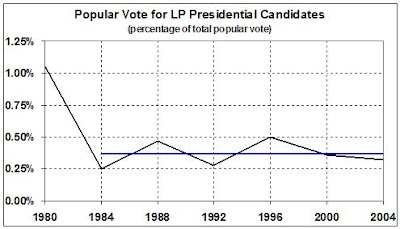 Remember 1980, that year of great disaffection for Jimmy Carter and the boomlet for John Anderson, who wound up with 6.6 percent of the popular vote? The LP was still a novelty, and the LP ballot line was new to many voters. "A libertarian (whatever that is), why not?" Thus the wastage of almost 1 million votes on Ed Clark.

Voters haven't been as generous to the LP since 1980. Not even in 1992, when Ross Perot capitalized on the disaffection for G.H.W. Bush and drew 19 percent of the popular vote, probably swinging the election to Bill (not-fit-for the Supreme Court) Clinton.

Why does the LP keep wasting its money on presidential candidates, potentially causing the defeat of a Republican: just as the votes cast by Floridians for Ralph Nader in 1980 cost the Democrats that year's election? Stubborn pride. Too "pure" to play in the same sandbox as Republicans? Who knows?

I'll vote for a Republican -- any Republican, even a Bush-type -- before wasting my vote on a Libertarian Party candidate.

P.S. (12/17/07): Ron Paul seems to understand. The erstwhile LP candidate for president (0.47 percent of the popular vote in 1988) has won and held his seat in the U.S. House by running as a Republican. Paul's candidacy for the GOP nomination makes him visible to the public, and will do far more to inject libertarian ideas into the political mainstream than would another futile run on the Libertarian ticket. If Paul were to run on the LP ticket after losing the GOP nomination, he might do even better than Ed Clark did in 1980, but only because of his (Paul's) exposure to the public via the GOP race.

P.P.S. (12/17/07): What's my position on Ron Paul? I like his federalist, limited-government principles. I don't like his extreme isolationism. And I don't like his apparent willingness to accept the support of kooks, conspiracy theorists, and racists. UPDATE (12/20/07): On the third point, this doesn't look good.) One out of three isn't a good average, in my book. I pass on Paul. UPDATE (12/27/07): The item linked in the previous update has since been updated. Paul probably is not playing footsie with racist whites. That said, I'm still against him because of his extreme isolationism. UPDATE (01/11/08): There are so many smoking guns about Ron Paul in this piece that it is impossible for me to believe that the man is, in any way, a libertarian. For evidence that he is just plain nuts, see this.

Related posts:
I Wish It Were Thus
My Advice to the LP
Great Minds Agree, More or Less
Good Advice for the Libertarian Party
Posted by Loquitur Veritatem at 5:55 PM