Not Enough Boots: The Why of It

Not Enough Boots
Defense as the Ultimate Social Service
I Have an Idea
The Price of Liberty
How to View Defense Spending
The Best Defense...

Iran foments much of the so-called insurgency in Iraq. Iraqi terrorists might be infiltrating the U.S. via Mexico. These are military problems, not diplomatic or law-enforcement problems. Yet, we are unable to respond to those problems militarily because we continue on the course that was set when Truman surrendered Korea to the Communists. What is that course? This:* 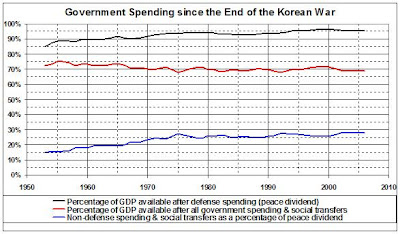 Note: For a clearer view of the graph, right-click on it and select "open link in a new tab."

I have argued that defense spending should be independent of GDP; that is, it should be geared to the threats we face, and not be set at an arbitrary percentage of GDP. I have not changed my position.

The black line plots the percentage of GDP that is available after defense spending (a percentage that I call the "peace dividend"). The red line plots the percentage of GDP available after government spending and social transfer payments at all levels of government: national, State, and local. Note that the red line moves downward even as the black line moves upward. The growing distance between the lines measures the rising share of GDP that is commandeered by government for non-defense spending and social transfer payments.**

The blue line takes us to the heart of the matter. The blue line plots all non-defense spending plus social transfers as a percentage of the peace dividend. That percentage has nearly doubled since the end of the Korean War.

In fact, there has been for more than seventy years a felt need among politicians to respond to the voices that call loudly for more "social services." Such services -- in the minds of politicians -- must come at the expense of defense spending. And so they do, even though defense is the ultimate "social service."

Imagine, then, the defenses we could mount if non-defense spending plus social transfers had not risen above ten percent of GDP. What is special about ten percent? That was a satisfactory share for non-defense spending plus social transfers from the end of the Civil War through the early 1900s -- an era of rapid economic growth. In fact, that share remained satisfactory through 1929. It took the unique, government-fostered Great Depression to create in the minds of most Americans the false idea that we need government to ensure economic growth and take care of "social needs."

So, here we are, rich in "social services" -- except by the standards of no-growth Euro-socialists who free-ride on our defenses -- but vulnerable to terrorists and opportunists (like those in Iran and Russia).

Other related posts:
The Destruction of Wealth and Income by the State
Things to Come
__________
* Here is a longer view of the trends: 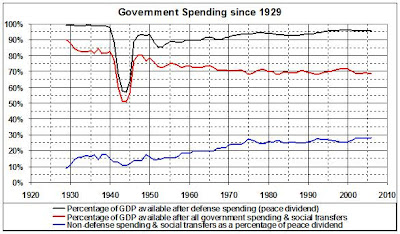 This figure makes more obvious the growing allocation of the peace dividend to non-defense spending and social transfers. That trend began with the onset of the Great Depression, but it was interrupted by World War II -- the last war in which the United States committed itself to total victory. The trend re-started at the end of World War II and became almost irreversible after the end of the Korean War, which is the point I chose to emphasize above. The low level of defense spending in the 1930s and the sudden drop after World War II arose from the (false) perception that the United States and its overseas interests did not then face serious threats from abroad. The peace dividends of the 1930s and late 1940s were declared before the peace had been won. The peace dividend of the 1990s and 2000s has cost us the ability to deter Russia and Iran (among others) while we respond (half-heartedly) to terrorism and those who foment it.

** I include social transfer payments in the analysis because, even though they are not government expenditures (by the standards of economic accounting), they do take money away from those who earn it and give it to those who do not. Social transfers therefore diminish the incentives that foster economic growth. Moreover, the tax revenues generated for the purpose of making such transfers could be applied to defense. That would create a "transition" problem with respect to Social Security, but it is a problem with a straightforward solution.
Posted by Loquitur Veritatem at 4:45 PM