Arnold Kling observes, in an article in the June 1 edition of TCS Daily, that

[according to The Forgotten Man by Amity Shlaes, Franklin] Roosevelt's vaunted brain trust was divided as well as misguided. Some shared an outlook that one might trace back to Jefferson and Jackson, of hostility toward Wall Street finance and concentrated economic power. They wanted to break up large businesses and create a level playing field for the common man.

Others, however, were ready to embrace bigness. This group held that a modern economy was characterized by great economies of scale. They viewed laissez-faire capitalism as "horse-and-buggy economics." They saw a future of collectivization and central planning. For this group, Italy and the Soviet Union represented successful role models.

Roosevelt turned to his populist advisers for campaign rhetoric and for tax proposals that would punish wealthy individuals and large corporations. But most of the New Deal, including the alphabet-soup agencies like the NRA and the TVA, reflected the influence of the collectivist-planners.

In the June 26 edition of TCS Daily, Kling predicts that

[t]he Democratic Party base does not want to see a rerun of President Clinton's budget-balancing approach. They are looking instead at Franklin Roosevelt [the New Deal] and Lyndon B. Johnson [the Great Society] as models for the next Administration. In addition to socialized medicine, they want major new initiatives and dramatic spending increases in anti-poverty programs, education, and so on. They are not willing to be thwarted by questions about where the money might come from to pay for this....

My prediction is that we will see tax increases on estates, high incomes, and other popular targets....

If the economy remains strong, so that tax revenues are healthy, then the big spenders probably will get a lot of their wish list, such as government day-care programs, more money to throw down the public school drain, and job training programs. The only thing that can stop the next wave of taxpayer-funded feel-goodism would be a recession in 2008-2009.

Kling is right about Roosevelt, the Democrat Party, and the likely outcome of the 2008 election. Moreover, the economy is likely to remain strong -- or to seem as if it remains strong -- thus opening the way to a further expansion of the New Deal-Great Society. What will go unheeded is the insidious long-term effect of Rooseveltian-Johnsonian policies on the economy. As I wrote here and here,
A principal result of economic ignorance is an inability to grasp the subtle, corrosive effects of big government on those things that drive economic progress: invention, innovation, entrepreneurship, the saving that funds those activities, and the hard work that makes possible the rest. Americans of today are far better off materially than Americans of a century ago -- but very few Americans (and policymakers) understand how much better off they would be had they not clamored for (and delivered) bigger government.

Now, the question is how much worse off Americans will be a generation hence. To answer that question, I revisited the estimates of real GDP that underlie my earlier work. I used the new estimates in the following chart, dividing the data into four eras (described below) and indicating the exponential trends for two eras (1790-1907, 1970-2006). 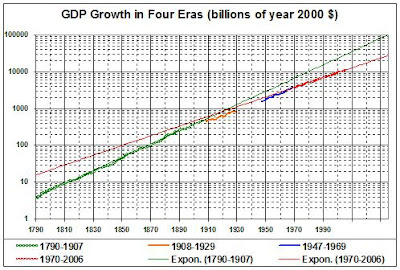 This graph is based on new estimates of real GDP from Louis D. Johnston and Samuel H. Williamson, "The Annual Real and Nominal GDP for the United States, 1790 - Present." Economic History Services, URL : http://eh.net/hmit/gdp/. The new estimates cover the period through 2006 (vice 2003 in my earlier work). On re-examining the data, I decided that 1907 (vice 1906) was the last year of the laissez-faire era; that is, the effects of TR's anti-business policies did not begin to affect GDP growth seriously until 1908.

The four distinct eras and the annual rate of growth in real GDP during each of them:
(I have omitted 1930-1946 because the GDP figures for World War II grossly overstate the value of goods and services available to the civilian population and (falsely) suggest a high rate of growth for era.)

For more about the effects of taxation and regulation on GDP growth, and the failure of the New Deal to bring the country out of the Great Depression, go here and here.

The bottom line (all GDP estimates are in year 2000 dollars):
That -- I am sorry to say -- is the shape of things to come economically.

I have discussed, in these posts, the shape of things to come socially.
Posted by Loquitur Veritatem at 3:11 PM