The Movies: (Not) Better Than Ever

According to the lists of movies that I keep at the Internet Movie Database (IMDb), I have thus far seen 2,034 theatrically released feature films in my lifetime. That number does not include such forgettable fare as the grade-B westerns, war movies, and Bowery Boys comedies that I saw on Saturdays, at two-for-a-nickel, during my pre-teen years.

I have given 570 (28 percent) of those 2,034 films a rating of 8, 9, or 10 (out of 10). The proportion of high ratings does not indicate low standards on my part; rather, it indicates the care with which I have (usually) selected films for viewing.

I call the 570 highly rated films my favorites. I won't list all them here, but I will mention some of them -- and their stars -- as I analyze the up-and-down history of film-making.

I must, at the outset, admit two biases that have shaped my selection of favorite movies. First, because I'm a more or less typical American movie-goer (or movie-viewer, since the advent of cable, VCR, and DVD), my list of favorites is dominated by American films starring American actors.

A second bias is my general aversion to silent features and early talkies. Most of the directors and actors of the silent era relied on "stagy" acting to compensate for the lack of sound -- a style that persisted into the early 1930s. There are exceptions, of course. Consider Charlie Chaplin, whose genius as a director and comic actor made a virtue of silence; my list of favorites includes two of Chaplin's silent features (The Gold Rush, 1925) and (City Lights, 1931). Perhaps a greater comic actor (and certainly a more physical one) than Chaplin was Buster Keaton, whose Our Hospitality (1923), The Navigator (1924), Sherlock Jr. (1924), The General (1927), and Steamboat Bill Jr. (1928) outnumber Chaplin's contributions to my favorites. My list of favorites includes only ten other films from the years before 1933, among them F.W. Murnau's Nosferatu the Vampire (1922) and Fritz Lang's Metropolis (1927) -- the themes of which (supernatural and futuristic, respectively) enabled them to transcend the limitations of silence -- and such early talkies as Whoopee! (1930), Dracula (1931), and Grand Hotel (1932).

On the whole, I can recall having seen only 42 feature films that were released before 1933, 17 of which (40 percent) rank among my favorites. (I plan, however, to increase that number as I sample other highly rated silent films, including several of Harold Lloyd's.) So, I will say no more here about films released before 1933. I will focus, instead, on movies released from 1933 to the present -- which I consider the "modern" era of film-making.

My inventory of modern films comprises 1,992 titles, of which I have rated 553 at 8, 9, or 10 on the IMDb scale. But the overall proportion of favorites (28 percent) masks vast differences in the quality of modern films, which were produced in three markedly different eras:
What made the Golden Age golden, and why did films go from golden to abysmal to vile? Read on.

To understand what made the Golden Age golden, let's consider what makes a great movie: a novel or engaging plot, dialogue that is fresh if not witty, and strong performances (acting, singing, and/or dancing). (A great animated feature may be somewhat weaker on plot and dialogue if the animations and sound track are first rate.) The Golden Age was golden largely because the advent of sound fostered creativity -- plots could be advanced through dialogue, actors could deliver real dialogue, and singers and dancers could sing and dance with abandon. It took a few years to fully realize the potential of sound, but movies hit their stride just as the country was seeking respite from worldly cares: first, a lingering and deepening Depression, then the growing certainty of war.

Studios vied with each other to entice movie-goers with new plots (or plots that seemed new when embellished with sound), fresh and often wickedly witty dialogue, and -- perhaps most important of all -- captivating performers. The generation of super-stars that came of age in the 1930s consisted mainly of handsome men and beautiful women, blessed with distinctive personalities, and equipped by their experience on the stage to deliver their lines vibrantly and with impeccable diction.

Why did movies go into decline after 1942's releases? World War II certainly provided an impetus for the end of the Golden Age. The war diverted resources from the production of major theatrical films; grade-A features gave way to low-budget fare. And some of the superstars of the Golden Age went off to war. (Two who remained civilians -- Leslie Howard and Carole Lombard -- were killed during the war.) With the resumption of full production in 1946, the surviving superstars who hadn't retired were fading fast, though their presence still propelled many a movie. In fact, superstars of the Golden Age starred in 44 of my 98 favorites from the Abysmal Years but only two of my 359 favorites from the Vile Years.

But every excellent film produced during the Abysmal and Vile Years has been surrounded by outpourings of dreck, schlock, and bile. The generally tepid effusions of the Abysmal Years were succeeded by the excesses of the Vile Years: films that feature noise, violence, sex, and drugs for the sake of noise, violence, sex, and drugs; movies whose only "virtue" is their appeal to such undiscerning groups as teeny-boppers, wannabe hoodlums, resentful minorities, and reflexive leftists; movies filled with "bathroom" and other varieties of "humor" so low as to make the Keystone Cops seem paragons of sophisticated wit.

In sum, movies have become progressively worse than ever since the end of the Golden Age -- and I have the numbers to prove it. The numbers are based on my IMDb ratings, and my conclusion about the low estate of film-making flows from those ratings. That is to say, I came to the conclusion that the quality of films has been in decline since 1942 only after having rated some 2,000 films. Before I looked at the numbers I believed that there had been a renaissance in film-making, inasmuch as the number of highly rated films (favorites), has been rising since the latter part of the Abysmal Years: 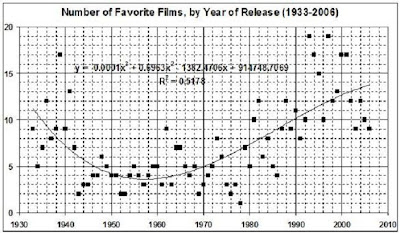 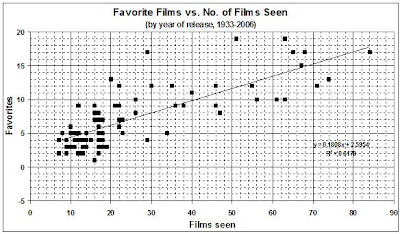 Those observations led to me to run a regression films released from 1933 through 2006. The result: 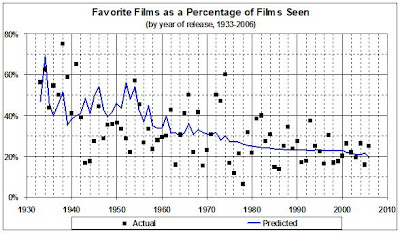 The downward trend is unmistakable, both in the data and in the predictions:
Imagine how much steeper the downward trend would be if my observations were to include absolute trash of the sort that dominates the trailers which one encounters on TV and DVDs. My selectivity in movie-watching has led me to overstate the quality of recent and current movie offerings.

Movies are worse than ever, but there are gems yet to be found among the dross.

UPDATE: The lowest IMDb rating for a movie is a "1" -- a rating that I have given to 37 films. Those 37 are the movies that I found too moronic or vile to watch to the end. The following table lists the films, shows my ratings, and shows the average ratings assigned by users of IMDb. It is telling that (with three exceptions) the average ratings range from 6.6 to 8.2 -- relatively high scores in the world of IMDb.

Posted by Loquitur Veritatem at 8:00 PM