As Lawrence Kudlow notes, in a post at Kudlow's Money Politic$, "over the last 25 years, unemployment and inflation have actually moved in tandem and they have both moved down." That's exactly right. From 1929 until the early 1980s, when inflation was brought under control, inflation (as measured by the GDP deflator) tended to move in a direction opposite that of the unemployment rate. Since the early 1980s, both inflation and the unemployment rate have been moving generally downward, that is, in the same direction: 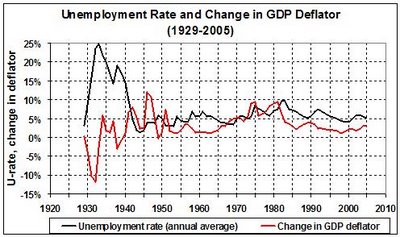 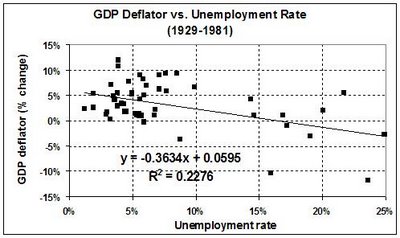 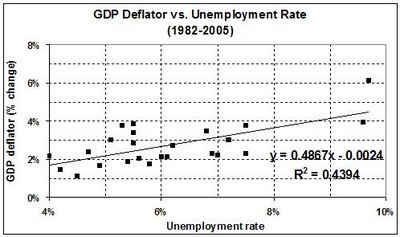 Expectations of higher inflation, ceteris paribus, drive up interest rates and make capital investments less attractive; expectations of lower inflation, by the same token, make capital investments more attractive. Expectations of lower and then consistently low inflation since the early 1980s have encouraged investments that, in themselves, help to contain inflation by making it possible to produce goods and services at lower (real) cost. Those investments also have fueled more rapid (and less volatile) economic growth than that experienced from the end of World War II to the early 1980s. As a result, job creation has tended to outpace the growth of the labor pool; thus the downward trend in the unemployment rate. The postive frame of mind caused by lower inflation, coupled with more robust economic growth, has been reinforced by having had two tax-cutting presidents (Reagan and Bush II) and the Republican-enforced fiscal discipline of the Clinton presidency. It's all a virtuous cycle.

Thus endeth the Phillips Curve, unless and until our "masters" in Washington decide, once again, to stifle economic growth by raising taxes and reinstituting the regulatory excesses of the Clinton era.

Posted by Loquitur Veritatem at 6:32 PM