There are many ways to compare performances in baseball. The most common way to compare home-run hitters is by the number of home runs compiled in a career or in a season. With Barry Bonds in (perhaps futile) pursuit of Hank Aaron's career home-run record, there is renewed attention to question of the "greatest" home-run hitter of all time. Here's the usual list of the top-10 home run hitters, through the 2005 season, with relevant embellishments:

The right column of Table 1 (home runs per at-bat) gives away one of the shortcomings of looking at total home runs; namely, that statistic recognizes longevity as much as it does prowess. Let's look, instead, at career leaders ranked by home runs per at-bat, first including active players under the age of 40 (Table 2) and then excluding them (Table 3):

Tables 2 and 3 give a better indication of prowess than Table 1, but they do not take into account how the game of baseball has changed with time. A way to do that is to see how often a player excelled at hitting home runs, relative to his peers:

The criterion used in Table 4 still falls short because it doesn't take into account home-run frequency, which -- as I suggest above -- is a better indicator of prowess. Thus this comparison:

There we have it, dominance against one's peers by a purer measure of prowess: home runs per at-bat in a season. Even purer measures are possible. As a Sabermetrician would tell you, seasonal performance should be adjusted for the characteristics of the ballparks a player played in, for the quality of the teams he played on (relative to the opposition), the equipment, the rules (e.g., height of the pitching mound), and so on.

Such adjustments might, for example, knock Mel Ott from his second-place perch because Ott (a left-handed batter) played his entire career (about one-half of his games) at the Polo Grounds, with its short foul lines (only 258 feet down the right-field line) and cavernous center field:

But Ott had to pull the ball sharply to take advantage of the peculiar geometry of the Polo Grounds, which meant that he had to adopt and perfect a peculiar batting style (a matter of skill). Because of that style, pitchers could more easily avoid throwing him pitches that he could pull, and fielders could more readily position themselves to defend the outfield gaps. In spite of that, Ott compiled a lifetime batting average of .304 while leading his league in HR/AB 10 times! Ott stays on the list, as do the other odd-balls: 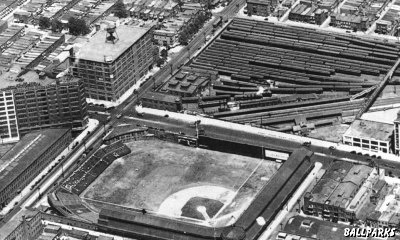 It's impossible, really, to compare players who were not contemporaries. That's why I like Table 5. It affords the best picture of home-run prowess across time. Ruth still stands at the top of the list; the long-forgotten Mel Ott and Cy Williams are restored to the prominence they enjoyed when they played; and Ralph Kiner, Harmon Killebrew, Ted Williams, Mike Schmidt, and Willie McCovey re-gain their proper places of pre-eminence, unshadowed by players who racked up home runs through sheer longevity. Should McGwire and Bonds really be listed among the greats? Certainly they were the greats of their era, however they got there. That's all I have to say about that -- for now.

And so, with the help of Table 5, we can trace the succession of pre-eminent home-run hitters who played most or all of their careers in the "lively ball" era:

To see who filled the gaps, go here.

ACKNOWLEDGEMENTS: Players' statistics from Baseball-Reference.com; ballpark stats and photos from Ballparks by Munsey and Suppes.

Posted by Loquitur Veritatem at 3:12 PM