Thanks to Mike Rappaport (The Right Coast), I found the most recent edition of the Economic Freedom Index for each of the 50 United States. I then created this graphic: 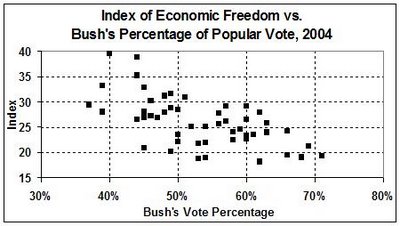 The lower the index, the greater the degree of economic freedom enjoyed by the residents of a State.

It's not surprising to find that Republican-leaning States enjoy more economic freedom than Democrat-leaning States. Whatever Bush is -- or isn't -- with respect to "big government," persons who vote Republican tend to favor a greater degree of laissez-faire than persons who vote Democrat. (In fact, Bush's record, properly interpreted, is on a par with that of other post-Great Society presidents. It isn't worse, as some pundits would have you believe.)

Residents of Red States not only enjoy more economic freedom (e.g., lower tax rates), they also are more open-handed than residents of Blue States when it comes to charity. That is, they not only talk about the value of voluntarism, they do something about it. So-called "Republican greed" isn't "greed," it's a legitimate desire to decide for one's self how best to apply the fruit's of one's labor. Democrats would nevertheless persist in calling Republicans "greedy," but by the standard of charitable giving, "greed" is a Democrat trait: 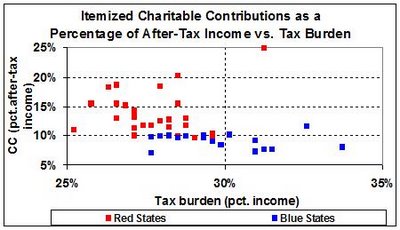 Details and sources are given in this post, where I wrote:

Posted by Loquitur Veritatem at 4:25 PM