[c]ompetitive federalism has many advantages. Citizens can move to communities that better reflect their preferences for public goods, they can vote with their feet, thereby penalizing poorly performing governments, and they can serve as a salutary example for others by trying out new ideas in governing.

I agree that the ability to vote with one's feet is essential to liberty. As I wrote here, 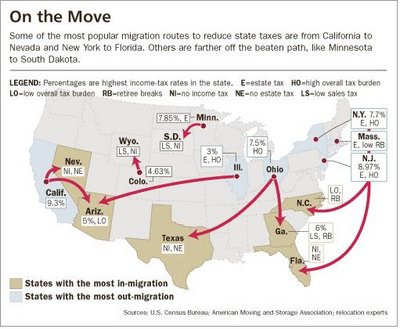 But how many States do we need? Ideally, a lot more than 1,000. In the same post I proposed the establishment of a

zone of liberty [which] would be something like a "new city" -- with a big difference. Uninhabited land would be acquired by a wealthy lover (or lovers) of liberty (call him or them the "developer"). The zone would be populated initially by immigrants, who would buy parcels of land from the developer, and who would be allowed to build the home or business of their choosing on the land that they buy. Sub-developers would be allowed to acquire large parcels, subdivide those parcels, and attach perpetual covenants to the use of the subdivided parcels -- covenants that initial and subsequent buyers would knowingly accept. Absentee ownership would be prohibited.

How many persons would inhabit a zone of liberty?

I would constrain the size and membership of each zone of liberty, creating more of them instead of allowing any one of them to grow beyond the size of a small village -- perhaps not exceeding a population of 150.

Posted by Loquitur Veritatem at 12:45 PM