A Rant about Torture

I’d love to know where the SA contributors and yellers stand on torture. How many believe that torture is never permissible?

One of her co-bloggers responds:

To which I said:

Think about the implications of what you are saying when you say that “torture is never morally permissible.” If “torture is never morally permissible” one would never torture a terrorist in order to save a city or a kidnapper in order to save a child who has been buried in a container with a limited amount of oxygen — to take but two relevant examples. By the way, torture can work — contrary to the protestations of the anti-torture crowd. How? You get the subject to cough up the information you’re seeking, and you tell him that if the information is incorrect he ain’t seen nothin’ yet. And you can make it proportional, for example, a family for a family unless the information is correct. Of course, I’m talking about situations in which it’s quite clear that the torturee has or can lead you to the information you seek. If that’s not the case, you’re just wasting your time. Cold-blooded. You bet. This isn’t a game of tiddly-winks, it’s a fight to the finish. I think it’s immoral not to save innocent lives. That’s what’s not morally permissible.

For more about the "fight to the finish," read this.

P.S. Anyone who thinks that abstaining from torture will make the bad guys any less bad hasn't been paying attention: 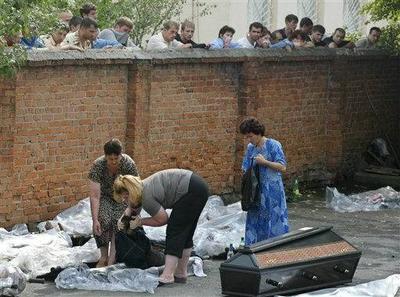 Women take the body of their relative killed in a school seizure, in a makeshift morgue in Vladikavkaz, North Ossetia, Saturday, Sept. 4, 2004. The bodies were brought to Vladikavkaz for identification. More than 340 people were killed in a southern Russian school that had been seized by militants, a prosecutor said Saturday. (AP Photo/Sergey Ponomarev)
* * *
Pair of Car Bombs in Iraq Kill Dozens, Including Many Children

BAGHDAD, Iraq, Sept. 30 — In one of the most horrific attacks here since the fall of Saddam Hussein, a pair of car bombs tore through a street celebration today at the opening of a new government-built sewer plant, killing 41 Iraqi civilians, at least 34 of them children, and wounding 139 people.

The bombs exploded seconds apart, creating a chaotic scene of dying children and grieving parents, some of them holding up the blood-soaked clothes of their young, and howling in lament. Arms and legs lay amid pools of blood, with some survivors pointing to the walls of the sewer plant, now spattered with flesh....

A group led by Al Qaeda-ally Abu Musab al-Zarqawi has showed the beheading of Japanese hostage Shosei Koda in Iraq while he was lying on top of a US flag in an Internet video.
* * *
Two wrongs don't make a right. But the use of torture in an effort to prevent such acts is right. What's wrong is a deliberate failure to prevent such acts because of a squeamishness about torture. Torture in such circumstances is a defensive act, not an aggressive or punitive one.
Posted by Loquitur Veritatem at 8:52 PM