What does this outstanding productivity performance say about economic policy under President Bush? Nothing. Let me repeat. Nothing. There is no political point-scoring to be made out of the news on productivity.

First of all, it is important to understand that, for the most part, productivity growth is the economy's gift to policymakers, not the other way around. It would be foolish to attribute to tax cuts that which ought to be attributed to Moore's Law.

All very sensible, but I think that Kling may be too quick to disassociate productivity growth and tax cuts. Drawing on BLS data, I constructed the following graph: 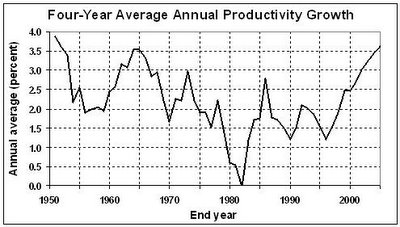 Note: Derived from annual data for nonfarm business productivity, 1948-2005, which are available via this link. The productivity gain for 2005 is based on the average for the first three quarters.

I take the gain for 1948-51 to be related to retooling after World War II. But productivity surges since then seem to have had something to do with cuts in federal income-tax rates:
To take the longer view:
A cut in the top marginal tax rate leaves more money in the hands of those who are most likely to invest in productivity-enhancing technology, either directly or by acquiring equity in new and established companies. So, I would give tax-rate cuts at least a share of the credit for productivity growth. Specifically, the resurgence of tax-cutting Republicanism has given investors renewed confidence that their investments will pay off. That boost survived Bush Senior's modest tax hike and Clinton's somewhat less modest one. Had Bush Junior not been elected in 2000, however, I believe that the productivity surge would have been curtailed, and that we would now be in the grip of stagflation.
Posted by Loquitur Veritatem at 2:40 PM