The Hockey Stick Is Broken

I wrote twice in October about the impending demise of the hockey-stick model of global warming. The hockey-stick model purports to show that temperatures on Earth have risen sharply in the past century, ostensibly because of human activity. That model is, of course, a favorite of Luddite leftists, many of whom are bandwagon scientists who give blind allegiance to the model.

The article that promises to drive a stake into the heart of the hockey-stick model is about to be published. The bottom line can be seen in this graph (available here): 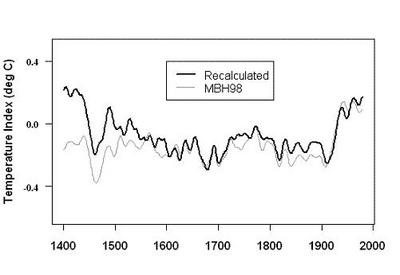 "MBH98" (the light line) is the infamous hockey-stick depiction of Earth's temperature trend. "Recalculated" (the dark line) is the correct depiction.

As I have written before -- here, here, and here, for instance -- there's evidence that global warming has little to do with human activity and a lot to do with extraterrestrial events.

(Thanks to FuturePundit for the tip.)
Posted by Loquitur Veritatem at 8:53 PM