A Century of Progress?

Many, many horrific things happened in the twentieth century, but -- despite it all -- America made tremendous economic progress. Consider real GDP per capita, which (in year 2000 dollars) was about $4,300 in 1900 and $34,900 in 2000. That increase represents an annualized rate of growth of 2.1 percent.

Before we throw a party to celebrate that great accomplishment, let's look behind the numbers.

Monetary measures of GDP exclude a lot of things that might be captured in the term "quality of life"; for example:

[F]ailing to account for the output produced within households may lead to misleading comparisons of economy-wide production, as conventionally measured. The female labor force participation rate in the United States has grown enormously since the early part of the 20th century. To the extent that the entry of women into paid employment has reduced the effort women devote to household production, the long-term trend in output, as measured by gross domestic product (GDP), may exaggerate the true growth in national output. [Committee on National Statistics (CNSTAT), Designing Nonmarket Accounts for the United States: Interim Report (2003), p. 9 in HTML version]

The "effort that women devote to household production" involves a lot more than shopping, cooking, cleaning, and all of the other activities usually associated with the term "housewife." Not the least among those activities is the raising of children. Child-rearing (a quaint but still meaningful phrase) includes more than feeding, bathing, and toilet training. Parents -- and especially mothers -- impart lessons about civility -- lessons that are neglected when children are left on their own to disport with friends, watch TV, and imbibe the nihilistic lyrics that pervade popular music.

Yet, the apparently robust growth of real GDP per capita between owes much to the huge increase in the proportion of women seeking work outside the home. The labor-force participation rate for women of "working age" (14 and older in 1900, 16 and older in 2000) grew from 19 percent in 1900 to 60 percent in 2000, while the rate for men dropped only slightly, from 80 percent to 75 percent. Who knows how much damage society has suffered -- and will yet suffer -- because of the exodus into the workforce of women with children at home? These figures suggest the extent of that exodus in the latter half of the twentieth century: 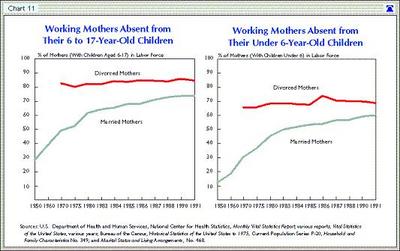 Because estimates of GDP don't capture the value of child-rearing and other aspects of "household production" by stay-at-home mothers, the best way to put 1900 and 2000 on the same footing is to estimate GDP for 2000 at the labor-force participation rates of 1900. The picture then looks quite different: real GDP per capita of $4,300 in 1900, real GDP per capita of $25,300 in 2000 (a reduction of 28 percent), and an annualized growth rate of 1.8 percent, rather than 2.1 percent.

The adjusted rate of growth in GDP per capita still overstates the expansion of prosperity in the twentieth century because it includes government spending, which is demonstrably counterproductive. A further adjustment for the cost of government -- which grew at an annualized rate of 7.5 during the century (excluding social transfer payments) -- yields these estimates: real GDP per capita of $3,900 in 1900, real GDP per capita of $19,800 in 2000, and an annualized growth rate of 1.6 percent. (In Part V of "Practical Libertarianism for Americans," I will estimate how much greater growth we would have enjoyed in the absence of government intervention.)

The twentieth century was a time of great material progress. And we know that there would have been significantly greater progress had the hand of government not been laid so heavily on the economy. But what we don't know is the immeasurable price we have paid -- and will pay -- for the exodus of mothers from the home. We can only name that price: greater incivility, mistrust, fear, property loss, injury, and death.