Several of the blogs that I follow have commented on a recent Washington Post article by John F. Harris, "Was Nov. 2 Realignment -- Or a Tilt?" Harris opens by saying this:

By any measure, President Bush and his fellow Republicans had a good night on Nov. 2. The question now is whether the election results set the GOP up for a good decade -- or more.

Harris then goes on to cite various experts, but only one whose views seem to be grounded in historical fact:

Yale political scientist David R. Mayhew two years ago wrote a book calling the entire notion of realignments a fiction, at least at the presidential level. In the 15 presidential elections since World War II, he noted, the incumbent party has kept power eight times and lost it seven times. "You can't get any closer to a coin toss than this," he said. "At the presidential level, the traits of the candidates are so important that they blot out party identification."

Mayhew is on to something, but his perspective is too short. Let's go back to 1868, the year of the first presidential election following the Civil War. That span of 136 years covers 35 presidential elections and three more-or-less distinct eras of dominance by one party or the other. Here's the big picture: 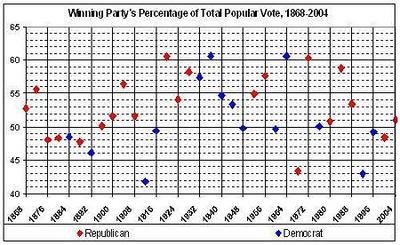 In the first era, Republicans dominated presidential politics from 1868 through 1928, winning 11 of 15 elections. The GOP might have made it 13 of 15 had Theodore Roosevelt's "Bull Moose" candidacy of 1912 not enabled the election (and re-election) of Woodrow Wilson. Following the Wilsonian interregnum, the Republican era resumed resoundingly in 1920, when the GOP "realigned" itself with its pre-Theodore Roosevelt theme of limited government.

The brief era of Democratic dominance began in 1932 and barely survived the 1948 election. Franklin D. Roosevelt's victory in 1932 had everything to do with the Great Depression and nothing to do with political philosophy. FDR wasn't offering "big government" in 1932, he was merely offering a fresh face. Southern Democrats continued to be Democrats and many Northern Republicans simply switched sides out of despair. This second era ended as abruptly as it had begun, with the Dixiecrat rebellion of 1948, which nearly cost Harry Truman the election.

And so the third era -- a new Republican era -- began with Eisenhower's victory in 1952. That victory -- built on Ike's popularity and Southern Democrats' repugnance for the national party's stance on civil rights -- marked the beginning of a long realignment in presidential politics. That realignment didn't end until the 1980s. Since then, Republicans and Democrats have been fighting border skirmishes over personalities and the issues of the day, just as they have in the past.

Will the continuation of the current Republican era be good or bad for the cause of libertarianism? Republicans, for the most part, seem to have given up on "limited government" for the sake of winning elections. Now, the GOP is the party of "relatively limited government." But the alternative -- a return to Democratic dominance -- is probably worse. What's a libertarian to do?

Posted by Loquitur Veritatem at 8:14 PM