How Attractive Is Your State?

Americans are known for "voting with their feet," that is, for moving to a more congenial locale, often across State lines. The reasons for doing so are many (e.g., being near family, getting away from family, taking a new job, retiring to a warmer climate, retiring to a climate and terrain conducive to winter sports). One of the reasons, of course, is to reduce one's State and local tax burden.

But moves based on tax reasons aren't tabulated in the 2008 Statistical Abstract, Table 31 (Movers by Type of Move and Reason for Moving: 2006), which seems (in my view) to understate the frequency of moves related to climate and retirement. A comparison of the totals in Table 31 with the corresponding totals in Table 33 (Mobility Status of Resident Population by State: 2005) suggests that Table 31 is incomplete, to the tune of about 6 million Americans out of the 45 million or so who change houses, counties, States, and countries every year.

So, it's up to me to quantify the extent to which decisions about interstate moves are influenced by State and local taxes, among other things.

2. Every State gains some new residents from other States, but some States are net gainers and others are net losers. To measure a particular State's net gain or loss, I subtracted 2.47 percent (the all-State average) from the percentage of residents who moved into that State from other States. Nevada is at one extreme, with a net gain of 3.07 percent; New York is at the other extreme, with a net loss of 1.24 percent.

3. Overall, there is a negative correlation (-0.399) between net gain and tax burden; the lower the tax burden, the greater the gain. Graphically: 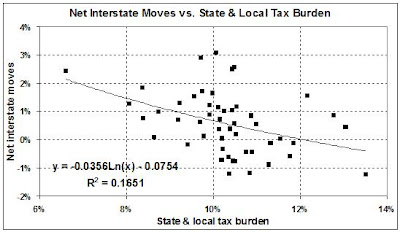 Sources: Net moves = net percentage of a State's population gained from/lost to other States. Net moves are computed at described in the text. Tax burdens for 2004 are from this table, available via this page at the website of The Tax Foundation.

4. Tax policy evidently has a strong effect on decisions to move from State to State. Another quantifiable factor to be accounted for is population. As it turns out, the less populous a State, the greater its attraction: 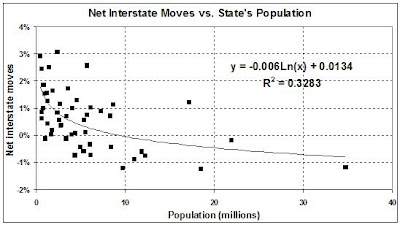 5. I took the obvious next step and ran a regression with natural logarithms of tax burden and population as explanatory variables, with this result:

The R-squared of the equation is 0.420. The F-test on the regression and the t-statistics on the intercept and explanatory variables all are significant at the 0.995 level of confidence, or better.

In other words, after adjusting for population, a 1-percentage point increase in the tax burden from the mean rate of 10.29 percent yields a net population loss of 0.25 percent.

6. The regression equation, as indicated by its fairly low R-squared, leaves much to be explained by factors other than tax burden and population (the latter of which may be a rough proxy for work and family connections). The difference between a State's actual net gain or loss and the net gain or loss estimated by the equation tells us something about that State's inherent attractiveness (or unattractiveness). For example, the actual net population gain for Arizona is 2.57 percent; the estimated net gain, 0.25 percent. The difference (known as the residual) is 2.32 percent, which is the largest residual for any State. Arizona is therefore (and for obvious reasons, given its climate) an inherently attractive State. At the other end of the spectrum is Michigan, with a residual of -1.19 percent, which makes it the least inherently attractive State (for entirely fathomable reasons, given its economy). 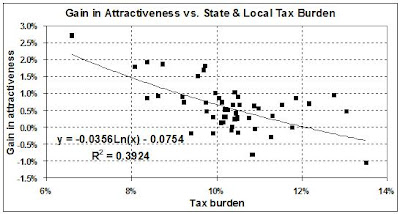 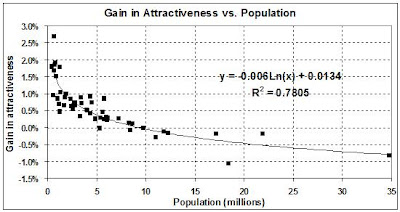 The two graphs immediately above underscore the importance of taxes and population (that is, the lack thereof) to a State's overall attractiveness.

States that gain or lose significantly (more than a standard deviation from the mean of 0.59%) fall into three categories:
How does your State stack up? See for yourself:

Posted by Loquitur Veritatem at 5:00 PM